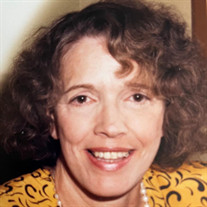 Judge Anne Cawthon Booth died peacefully at her home in Tallahassee on June 14, 2021. She was 87. At her bedside was her husband of 63 years, Edgar Charles Booth, Esq. In addition to her husband, Judge Booth is survived by her two children, Rainey Cawthon Booth, Esq. and John Edgar Booth, Esq.; her five grandchildren, Elizabeth Payne Booth, Esq., Rainey Cawthon Booth, II, Esq., Ariel Eden Booth, Emily Anne Booth, William Charles Booth, Esq.; and by her sister, Sarah Cawthon Shaw. Judge Booth was born in 1934 in Gainesville, Florida to Rainey Blackwell Cawthon and Sarah Payne Cawthon. Her family moved to Tallahassee, Florida when Judge Booth was two years old. Judge Booth had a lifelong passion for learning and after graduating from Leon High School, she attended the University of Florida as an agricultural major. She was the only female student in the department at the time. She graduated with high honors and led the graduation procession for her department, a spot reserved for the top student. While in college, Judge Booth was inducted into the following scholastic honor societies: Phi Beta Kappa, Phi Kappa Phi, Alpha Lambda Delta, Sigma Delta Pi, Phi Sigma, and Gamma Sigma Delta. Additionally, she was the recipient of the 1954 Kroger Scholarship for Outstanding Agricultural Student and of the 1956 Phi Sigma Award for Individual Research. After graduating from college, Judge Booth decided to attend law school. This was an unusual choice for her generation. Once again Judge Booth was the only female student in her class. Initially, her fellow male students teased her and told her that she was wasting everyone’s time, as she would never use her law degree. They even went so far as to shuffle and stomp their feet whenever she spoke in class. While the tactic was intended to intimidate her, Judge Booth would not be deterred. She scored at the top of her class and ultimately graduated in only 2 ½ years with High Honors. She received the Order of the Coif and the Brick Award for Legal Research and Writing. Most importantly, she met and married Edgar Charles Booth, a fellow law student, in 1958. Shortly after their marriage, Edgar, who was a commissioned Air Force officer, was posted to the Philippines, where the family lived for almost two years. Their oldest son, Rainey, was born in the Philippines in 1960. The family returned to Tallahassee and Judge Booth took a position as a law clerk for Justice Millard Caldwell (Florida’s former Governor 1945-1949). The job interview for this position was conducted by correspondence, and Justice Caldwell’s single interview question was typical of the gender bias Judge Booth faced throughout her career. Justice Caldwell wrote, “Tell me why I should hire a woman as a law clerk? I am a hard-to-get-along-with, very short-tempered person.” Judge Booth, no longer responding as an individual applicant but as a representative of her entire sex, wrote back, “It sounds to me like the only person who would put up with you would be a woman.” She was hired and worked with Justice Caldwell for four happy years. After Justice Caldwell retired, Judge Booth served as Chief Justice Boyd’s law clerk for another five years. Judge Booth then formed a law firm with her husband where she worked as a civil litigator until 1978, when she was appointed to the First District Court of Appeals by Governor Reubin Askew. Judge Anne Cawthon Booth was the first woman in the State of Florida to hold that position. In 1985, Judge Booth became the Chief Judge of the First District Court of Appeal. Again, she was the first female in Florida to be a Chief Judge. Judge Booth remained in the First District Court of Appeals until her retirement in 2005. Professionally, Judge Booth was known for her poignant questions to the lawyers arguing cases before her. Her written opinions were well reasoned, clear, and concise, and several were adopted in their entirety by the Florida Supreme Court. Personally, Judge Booth had a great sense of humor, a wonderful laugh, and she was devoted to her family and friends. She loved animals of all kinds and owned numerous dogs, cats, and birds, including a scarlet macaw named Sissie. Some people are great story tellers and some people create great stories through their actions. Judge Booth was the latter. Collectively, the Booth family could fill a volume with tales about Judge Booth. These stories range from the mischievous to tales of her strength of character to her courage in the face of a robber’s pointed handgun. In a belated effort at brevity, the family will simply say that Judge Booth was brilliant, independent, iron-willed, charming, and had a wonderful sense of humor. Arrayed before her were society’s long-standing gender barriers. Allow your imagination to concoct the many ways and means that someone with Judge Booth’s attributes would break through those obstacles, and you will probably not be far from the truth. Judge Anne Cawthon Booth was one of the finest people to ever walk the earth. She will be dearly missed and her memory cherished by all who were fortunate enough to know her. The Booth family also extends its deep appreciation to Jessica and Stephanie of Helping Hands for their care, kindness, and support of Judge Booth and the entire family. At her request there will be a small private grave side service. In lieu of flowers, the family request that donations be made to the charity of choice. Susie Mozolic of Bevis Funeral Home is assisting the family with their arrangements. (www.bevisfh.com 850-385-2193)

Judge Anne Cawthon Booth died peacefully at her home in Tallahassee on June 14, 2021. She was 87. At her bedside was her husband of 63 years, Edgar Charles Booth, Esq. In addition to her husband, Judge Booth is survived by her two children,... View Obituary & Service Information

The family of Judge Anne Cawthon Booth created this Life Tributes page to make it easy to share your memories.

Send flowers to the Booth family.