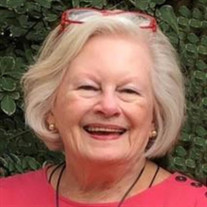 Anne Ausley Lee passed away Monday morning surrounded by her children after a brief illness. Anne Ausley was born on May 21, 1935 to Charles Saxon and Loranne DuBose Ausley. She graduated from Leon High School in 1953, and attended Duke University where she was a member of the Alpha Delta Pi Sorority. In 1956, Anne married Ryals Lee from Americus, GA. Anne and Ryals raised their 4 children in Tallahassee where Anne was involved in many community and civic organizations including the Tallahassee Junior League, the Violets Garden Club and the Cotillion Club. Anne and Ryals were founding members of Maclay School, and the Episcopal Church of the Advent which they attended for many years. Anne later joined St. John’s Episcopal Church. Anne and Ryals were married for 46 years, until his untimely death in 2002. Anne was later married to Carlos Heaton until his death in 2015. Anne is also predeceased by her parents and her sister, Nancy Ausley Hannon (Joe). Anne and Nancy were early entrepreneurs as the co-owners of Garden Flowers, a floral design and print invitation business. She was a lifelong artist, and was able to capture the unique qualities of the natural Florida that she loved so dearly. In recent years, she started painting colorful angels and offering them for sale with all of the proceeds supporting Whole Child Leon, a local organization focused on making sure kids get the best start in life. Although Anne always considered Tallahassee home, St. Teresa Beach held a special place in her heart. Her family house at the coast is where five generations of family and friends have built lifetime bonds on the front porch rockers and around the wooden, weathered ping pong table, and where the back of the closet door holds family history measured by notches of height comparisons over the years. Anne also enjoyed spending time in the mountains at the home she and Ryals built in Cashiers, NC. Anne is survived by her children, Ryals E. Lee Jr., Cathy Lee Trifiro, Charles A. Lee (Sheree), Elizabeth Lee Gwynn (David); her grandchildren, Ausley Trifiro, Henny Trifiro, Lezlee Richerson (Sibley), Landon Lee (Chrissy), Kamden Lee Schrowang (Austin), Zachary Gwynn, and George Gwynn; 4 great grandchildren; her brother, DuBose Ausley (Sallie); and the children of her second husband, Nancy Heaton Breedlove, and Ben Heaton. Affectionately known as Mia, she was a source of inspiration to her children, grandchildren, great-grandchildren and extended family of many cousins, nieces and nephews. The family will attend a private service on Thursday, April 15th at 2:00 pm, which will be livestreamed at https://www.saint-john.org/event/leefuneral/. All are welcome to join a socially distanced visitation at Capital City Country Club from 3:00 – 5:30 pm. In lieu of flowers, please consider a donation to St. John’s Episcopal Church or Whole Child Leon. Rocky Bevis of Bevis Funeral Home (850-385-2193 or www.bevisfh.com) is assisting the Lee family with their arrangements.

Anne Ausley Lee passed away Monday morning surrounded by her children after a brief illness. Anne Ausley was born on May 21, 1935 to Charles Saxon and Loranne DuBose Ausley. She graduated from Leon High School in 1953, and attended Duke University... View Obituary & Service Information

The family of Anne Ausley Lee created this Life Tributes page to make it easy to share your memories.

Anne Ausley Lee passed away Monday morning surrounded by her...

Send flowers to the Lee family.