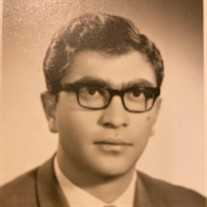 Babak Etemadi, Ph.D., made his “molecular transformation” from this life on June 4, 2021, following a lengthy illness. He was born August 8, 1941, to Ashraf A. and Hassan Etemadi, the fourth of five sons, in Sari, Mozandaran Province, Iran. He graduated from Alborz High School, Tehran, in 1961 and earned a B.S. and master’s degree in Physics from the University of Tehran, with research he conducted at the International Center for Theoretical Physics in Trieste, Italy. In 1966, on a NDEA (National Defense Education Act) Fellowship, he began a Ph.D. degree program in Theoretical Physics at Florida State University. After he finished his degree in 1971, he returned to Iran where he taught at Pars College and then at Arya Mehr University of Technology (now, Sharif University) in Tehran. Babak and his family relocated to Tallahassee in 1979, where he developed computer programming skills, worked at the FSU Geophysical Fluid Dynamics Institute (GFDI), the Computer Science Corporation and the State Energy Office. In 1985, he joined the FAMU Physics Department and retired as professor in 2009. Over his 30-year career he conducted research at The Enrico Fermi Institute at the University of Chicago; the University of Texas, Austin; the University of Missouri, Columbia, Missouri; and two additional times at the International Center for Theoretical Physics in Trieste. He wrote and co-wrote 23 Physics publications. Babak was devoted to his family. His kindness and generosity often directed toward helping others achieve their academic ambitions, will long be remembered, especially by nephews, nieces, and children of friends. In addition, he provided a home and love for a number of cats, dogs, and a rabbit. Those left behind to mourn his passing include his daughter, Lily Elizabeth Etemadi, son-in-law Alan C. Truesdell; grandson Walker Bijan Truesdell and Lily’s mother, Judy Nicholas Etemadi. He is survived by his brothers Bijan Etemadi and Siamak Etemadi and sister Manijeh Etemadi, all of Tehran, Iran; and nieces and nephews located around the world. His parents and brothers Eraj and Khosrow Etemadi preceded him in death. The family is appreciative for the care Babak received at Seven Hills Health and Rehabilitation and then at the end of his life from Big Bend Hospice. A memorial event will be held June 18th, at Bevis Funeral Home, 5:00 to 7:30, for those wishing to celebrate his life. Please wear celebratory, bright clothing. If you would like to honor his memory plant a tree or make a memorial contribution to Big Bend Hospice ( https://bigbendhospice.charityproud.org/Donate ) or the Animal Shelter Foundation (https://animalshelterfoundation.org/help/donate/ ). Kelly Barber of Bevis Funeral Home (850-385-2193 or www.bevisfh.com) is assisting the Etemadi family with their arrangements.

Babak Etemadi, Ph.D., made his &#8220;molecular transformation&#8221; from this life on June 4, 2021, following a lengthy illness. He was born August 8, 1941, to Ashraf A. and Hassan Etemadi, the fourth of five sons, in Sari, Mozandaran Province,... View Obituary & Service Information

The family of Babak Etemadi, Ph.D. created this Life Tributes page to make it easy to share your memories.

Babak Etemadi, Ph.D., made his “molecular transformation” from...