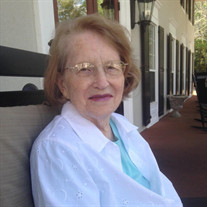 Barbara Power was born near Asheville, North Carolina on December 25, 1932 to Arthur Clayton Scruggs and Elner Martha Glanville Scruggs. She was the second eldest of five daughters. Barbara spent her early years in Glen Dale, Maryland, where she spent plenty of time outdoors with her siblings with plenty of land to explore. This fostered a life-long love of nature. She often kept a garden and loved walking in the woods, especially in the mountains. She often spoke fondly of her grandmother, mother, and many extended family members, who provided a warm and loving foundation for her faith and her life. Barbara was a long-time member of Thomasville Road Baptist Church, where she served many years in the children’s preschool ministry and later in the senior adult choir. She was a faithful servant, who lived her faith, which grew stronger with age. She was a homemaker during her children’s younger years, but eventually went to work for the State of Florida’s Employee Benefits. She decided in later years to go to college, something she was unable to do as a young adult but had always wanted to do. She graduated from Florida State University with a Bachelor of Arts & Sciences, majoring in English with an emphasis in creative writing. She also attended a semester abroad in London, England as part of her studies. She lived her faith in Jesus by loving others in practical and tangible ways. She was in many ways a steady presence in her family’s lives and a devoted mother. She could repurpose anything (a skill she learned from her mother) and was a fantastic cook! In later years, Barbara suffered the effects of dementia, but her love of music of music, including old hymns, never left her. They were in many ways her saving grace in those tough years. She sang up to the end and could still recall most of the words, which brought a beautiful smile to her face. What a blessing to see! Barbara is preceded in death by her siblings Mary Jenkins (Leon, Virginia), Josephine Curran (Norfolk, Virginia), and Jaqueline Mogg (Tallahassee, Florida). Her surviving sisters are Karen Crowe (Iowa) and her honorary sister and life-long friend, Marie Corley (Georgia). She is survived by three of her children: Mary Christine “Chris” Gibson (James Gibson) (Crawfordville, Florida), Timothy Phillips (Tallahassee, Florida), and Julia Clayton Lengacher (Rob Lengacher) (Tallahassee, Florida). Her son Paul Phillips passed away many years ago. She has three grandchildren: John Daniel Ross II (Crawfordville, Florida), and Grace and Mary Lengacher (Tallahassee, Florida). She has two great-grandchildren: Kady Louise Ross (Crawfordville, Florida) and John Daniel Ross III (Dana Ross) (Tallahassee, Florida), as well as three great-great grandchildren. The family would like to thank those caregivers and nurses, who are or were at St. Augustine Plantation during our mother’s time there. Some were truly angels sent by God to love those most vulnerable. We forever grateful to those workers, who loved mom. Out of an abundance of caution for friends’ and family’s health due to the pandemic, there will not be a memorial service. In lieu of flowers, which will fade, please consider honoring Barbara by donating to a local charity or helping a neighbor in need. Some suggested for local friends and family in Tallahassee would be Tallahassee: Big Bend Hospice (https://bigbendhospice.charityproud.org/Donate) or Second Harvest Food Bank (https://fightinghunger.org/donate-now/). These are difficult times for many, and she would be honored by your giving to those in their hour of need. Barbara was greatly loved and will be greatly missed! Todd Wahlquist with Bevis Funeral Home (850-385-2193, www.bevisfh.com) is assisting the family with their arrangements.

The family of Barbara Annette Scruggs Power created this Life Tributes page to make it easy to share your memories.

Barbara Power was born near Asheville, North Carolina on December...

Send flowers to the Power family.