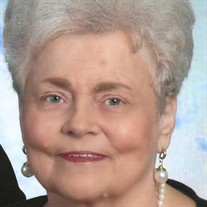 Beverly Carter, loving wife, mother, and grandmother, went to live with her Lord and Savior on April 10, 2021. She fiercely loved the Lord, her family, and those in her life. Oh! And she loved to shop! Bargains and Sale signs called to her. Beverly was born in Tallahassee on December 17, 1945 to Charles and Jeanette Richarde. She grew up in St. Marks where she owned a pet monkey, Kiko, watched her father bring in the tug boats at the docks loaded with exotic treasures, and zoomed around on her red scooter delivering groceries. Beverly was married to RH Carter for 57 years, after he first met her on the night she was crowned Homecoming Queen at Crawfordville High School. She was the most beautiful girl he had ever seen, but when he asked for a date, she simply replied, “No! You’ll have to get my parents’ approval first.” Eventually, they were married and she rarely called him anything else but ‘Achie’. Beverly was a loving and devoted mother to Terri, Robert, and Justin. Her grandchildren include Robin, Walker, Corrina, Bella, Jack, Manuella, Chris, Rick, and Sara. She was fun-loving, game for anything, and always kind and giving. Entertaining our pony in the dining room, picking up another pet like our dogs, cats, and the occasional squirrel (always named Oscar), and playing board games into the wee hours of the morning was normal for us. She enjoyed organizing holidays and celebrations and cooking all of the family’s favorites. She even kept a Christmas tree up all year because she loved the holiday so much. Beverly’s heart was also dedicated over the years to hundreds of third graders who passed through her door at Crawfordville and Medart Elementary Schools. She and her coworker, Yvette Roddenberry, were inseparable, preparing projects and bulletin boards, and loving on kids. Even up until this week, she answered to “Hi, Mrs. Roddenberry,” as well as the student who remembered her as “Mrs. Carter.” Beverly dearly loved teaching and children. Beverly Richarde Carter will be truly missed by all who knew her. A Visitation will be held at Friendship Primitive Baptist Church on Monday, April 12th from 6-8 PM. Services will be held on Tuesday, April 13th at Friendship Primitive Baptist Church at 11:00 AM, followed by a short graveside service. David Conn and Kimberly Crum with Bevis Funeral Home of Crawfordville are assisting the family with arrangements. (850-926-3333, www.bevisfh.com)

Beverly Carter, loving wife, mother, and grandmother, went to live with her Lord and Savior on April 10, 2021. She fiercely loved the Lord, her family, and those in her life. Oh! And she loved to shop! Bargains and Sale signs called to her.... View Obituary & Service Information

The family of Beverly Richarde Carter created this Life Tributes page to make it easy to share your memories.

Send flowers to the Carter family.