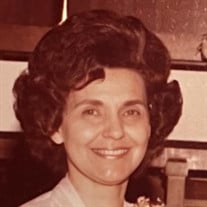 Not sure what to send?

Bobbie Hoyle DeHart died April 12, 2022 at the age of 85. She was born May 1, 1936 in Lincoln County, North Carolina. She was the daughter of Laura Essie Hoyle and grew up on a farm with a large and loving family of grandparents, aunts, uncles and cousins. Bobbie graduated from Union High School in Vale, NC in 1954; she married the love of her life Kenneth that same year. He always called her his bride. She was completely dedicated to him for 67 years before his death this past January. Seeking out warmer weather and water, they packed up their car and a trailer and moved to Jacksonville, Florida a couple years after their marriage. Though they started out with little, they both worked hard and became successful in their careers. Kenneth became a Jacksonville Police Officer and Bobbie worked at Jacksonville Electric Authority, where she retired after 29 years of service. Her favorite pastime was being able to spend time with her grandchildren and great-grandchildren, whom she adored. When not working, you could often find her in the kitchen making her family's favorite biscuits, served with creamed corn and homegrown tomatoes. She was preceded in death by her mother and her husband. She is survived by her daughter Sandra Estep and her husband, Ernie, of Denver, NC; her son, Kenneth DeHart, of Crawfordville, FL; three grandchildren, Amy Nichols, Laura Estep, Kenny DeHart; three great-grandchildren, Mallie Nichols, Gideon Nichols, and Ariella Webb. A service of remembrance will be held for Bobbie and Kenneth in Jacksonville, FL on June 13th at the Jacksonville National Cemetery. Those who wish to remember Bobbie in a special way are requested to make gifts in her memory to the non-profit Mosaic Educational and Arts Program started by her granddaughter Laura at https://www.mosaicgvl.org. PEEPLES Funeral Home (904) 764-2542. www.pffh.com is assisting the family with the service in Jacksonville.

Bobbie Hoyle DeHart died April 12, 2022 at the age of 85. She was born May 1, 1936 in Lincoln County, North Carolina. She was the daughter of Laura Essie Hoyle and grew up on a farm with a large and loving family of grandparents, aunts, uncles... View Obituary & Service Information

The family of Bobbie Hoyle DeHart created this Life Tributes page to make it easy to share your memories.

Send flowers to the DeHart family.