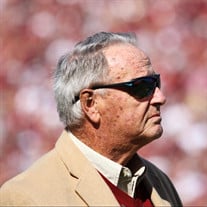 So much more than a football coach, Bobby Bowden combined historic success on the field with a passion for people and a love of life. His impact on the game is unquestioned but extended well beyond wins and championships. His influence on generations of young men, his leadership on and off the field and his lifetime of sportsmanship set examples that live on today in countless men and women, their children and grandchildren. Bowden’s love of football began while watching his neighborhood high school team practice over the fence of his backyard in Birmingham, Alabama. He grew into a star quarterback at Woodlawn High and fulfilled his dream to play at Alabama. He lasted one semester in Tuscaloosa before eloping with high school sweetheart Ann Estock and the two celebrated their 72nd wedding anniversary this year. He transferred to Howard College (now Samford) in his hometown where he earned Little All-America honors at quarterback After his playing days, Bowden served as an assistant football coach and head track coach at his alma mater from 1954-55. He left Howard to serve as athletics director and head coach at South Georgia Junior College from 1956-58. He returned to Howard as head coach from 1959-62. Ironically, he then joined the Florida State staff under Bill Peterson as receivers coach from 1963-65. West Virginia hired him as offensive coordinator in 1966 and he took over as the Mountaineers head coach from 1970-75. When the Seminoles were looking for a coach in 1976 after having won just four games over the previous three seasons, they turned to Bowden and over the next 34 years he, and FSU made history. He lived his life with three priorities “faith, family and football” making sure everyone he spoke to over his career knew that keeping the priorities in that order is the key. He was as at home chatting up families on home visits, speaking to a packed audience and exchanging jabs with Presidents in the White House. No program would become more closely associated with their iconic coach than are FSU and Bowden. So impressive are Bowden’s records that it is a challenge to find where to start. For many, his consensus 1993 and 1999 National Championship teams put the exclamation point on a career that saw him win more games than all but one other coach in the history of major college football. For football insiders, his unmatched run of finishing among the Associated Press Top 5 for 14 consecutive seasons (1987-1990), and winning 10 or more games each of those seasons, is even more impressive. Bowden’s final game at FSU was a win over, ironically, West Virginia in the 2010 Gator Bowl, which was the Seminoles’ 28th-straight bowl game. At the time, he was first among active coaches for winning percentage in bowl games, second for all-time bowl wins and second for bowl appearances. He is the only coach to lead a school to 15 consecutive New Year’s Day bowl games (1991-2005). He is the only coach in NCAA history to win 11 consecutive bowl games (1985-95) and the only one to have 14 consecutive bowl appearances (1982-95) without a loss. Overall, he guided Florida State to 31 bowl appearances in his 34 seasons. Bowden was named National Coach of the Year six times (1979, 1980, 1991, 1992, 1996 and 1999), and he led Florida State to 12 ACC Championships including eight in a row from 1992-2000). In a remarkable gesture, the College Football Hall of Fame’s long-standing rule of requiring retirement before induction was waved for him and Joe Paterno allowing Bowden not only to be inducted in 2006 but to receive the National Football Foundation’s highest distinction when he was awarded the Gold Medal joining the likes of Dwight D. Eisenhower, John F. Kennedy and H. Norman Schwarzkopf. So overwhelming was Bowden’s influence on college football that a national award recognizing character by the Fellowship of Christian Athletes was named in his honor. The Birmingham Touchdown Club renamed their national coach of the year award after Bowden, and FSU named the field at Doak Campbell Stadium in his honor. Under Bowden’s guidance, FSU not only produced great teams but exceptional players as well. Two Seminoles, Charlie Ward and Chris Weinke won the Heisman Trophy, 26 of his players were named consensus All-Americans and his players won multiple Thorpe, Butkus, Unitas, O’Brien, Groza and Lombardi trophies. His alumni also had remarkable success in the NFL with three, Deion Sanders, Walter Jones and Derrick Brooks, already enshrined in the Pro Football Hall of Fame. Over 150 Seminoles were drafted into the NFL over his 34-year tenure. Success off the field was always at the heart of Bowden’s message. Three of his greatest players, Warrick Dunn, Anquan Boldin and Derrick Brooks, became phenomenal pros and each was honored as the NFL Man of the Year for their character off the field. Bowden is the only college coach in history to coach three winners of the Walter Payton Award from one institution. In April, Florida Governor Ron DeSantis presented Bowden with the state’s first-ever Medal of Freedom in honor of his contributions to his adopted state. “Arguably the greatest coach in college football history, Coach Bowden’s legacy stretches far beyond the field, and our state is a better place because of him,” said DeSantis during the presentation. He was preceded in death by his parents Bob Pearce and Sunset Bowden, and his sister Marion Bowden Gamble. He is survived by his beloved wife Ann, daughters Robyn Hines (Jack) and Ginger Madden Bowden, and sons Stephen, Terry, Tommy (Linda), and Jeff (Cindi), 19 grandchildren and 14 great-grandchildren. In lieu of flowers, the family requests charitable contributions be made to the Fellowship of Christian Athletes ( https://www.fca.org/donate).

So much more than a football coach, Bobby Bowden combined historic success on the field with a passion for people and a love of life. His impact on the game is unquestioned but extended well beyond wins and championships. His influence on generations... View Obituary & Service Information

The family of Coach Bobby Bowden created this Life Tributes page to make it easy to share your memories.

So much more than a football coach, Bobby Bowden combined historic...

Send flowers to the Bowden family.