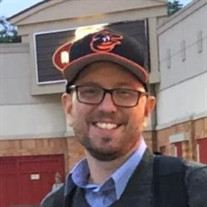 Brian Allen Dudley, 45, loving son, father, and friend, passed away on January 9, 2021 after a long battle with Glioblastoma Multiforme. He was born on February 4, 1975 to Betty and the late Bruce Dudley. Because of his father’s work as a journalist, he spent his youth living in Virginia and Tampa before moving to Tallahassee in his adolescence. He attended Lincoln High School and graduated from Florida State University with a degree in Interdisciplinary Studies with a specification in Anthropology. He was an ardent lover of learning and was a voracious reader. He enjoyed learning about people, different cultures, politics, social justice, science, and history. His favorite book was Alexandre Dumas’ The Count of Monte Cristo, which he read multiple times and owned several different copies of. While attending FSU, his love of books led him to work at Bill’s Bookstore and eventually the FSU Bookstore, where he rose to management positions that included Textbook Manager and Marketing Specialist. He eventually moved to Chicago, Illinois in 2010 for a position with Follett Higher Education Group. After less than a year he left the position and finally followed his life ling dream of being a writer like his father, and in 2012, he began his Master’s degree in Journalism at Roosevelt University in Chicago. During this time, he worked as a Peer Instructor as well as a freelance journalist. He reported on a range of topics including local politics, homelessness, race, and education. After earning his journalism degree in 2014, he landed a job as an Editorial Assistant with the magazine Cold Facts, the magazine of the Cryogenic Society of America. In 2015, he was promoted to Editor. He enjoyed his work, the people he met along the way, and the places he was able to travel. Although he had an immense love for his work, family, and friends, there was no greater love for him than his son, Braedon. He cherished every moment with his son and was a doting father. They did the traditional father son things of baseball games and teaching his son to ride a bike. But more than the things they did, it was the talking, the laughing, the learning from one another. Brian was heartbroken when he left Tallahassee for Chicago as it meant leaving his son. But the relationship between father and son never wavered, strained, or faltered. Instead, it became deeper, stronger, and more bonded each day. Brian returned to Tallahassee in 2019 after receiving his cancer diagnosis the year before. Surgery to remove the tumor from his temporal lobe caused some short-term memory and word recognition loss, which affected his work, and he decided that whatever time he had left, he wanted to spend with his family. His return home allowed him to spend real time with his mother, and he once said that if anything positive came from his awful disease, it was getting to know his mother all over again. He was grateful for that. He was also forever grateful for his time with his son. He did everything he could in a short amount of time to talk, laugh, teach, learn, and listen. Brian was so proud of the young man his son had become. He was happy that Braedon also has a love of reading and enjoyed that his son is a “cool nerd”, unlike him who was just a nerd (but proud of it). However, try as he might, he could never fully get his son to appreciate his love for his favorite musician – Prince. He proudly owned every album and CD, and almost every bootleg. He did teach his son the importance of respecting others, to stand up for his beliefs, and that life is hard so you have to work just as hard. When Brian learned of his cancer diagnosis, he never asked why me. He never had a pity party for himself or said that life was not fair. He never said that he didn’t deserve this. Never got angry. From the beginning he fought hard, doing everything and anything the doctors advised. But he always knew that in the end, he would lose the fight. But that didn’t matter. He fought anyway. He fought valiantly. He lived and he loved. In his 45 years of living, he touched people’s lives, rather it was a silly joke, an anecdote, or a philosophical conversation. He was witty, charming, stubborn, thoughtful, encouraging, intelligent, opinionated. He knew the art of listening and the importance of words. A friend described him as someone who expanded horizons and challenged injustices, while illuminating how the world could be a better place, one small policy change at a time. Brian is survived by his mother, Betty Dudley, sister Jill Dudley, son Braedon Dudley, aunts Sharon Mulligan (Ted) of Tavares, Florida, Patricia Rutroff (John) of Leesburg, Florida, Uncle Charles Clark of Iowa, many cousins, and friends. The family would also like to give special acknowledgement to Big Bend Hospice and Visiting Angels of Tallahassee for their support and assistance with Brian’s care. For those whose lives Brian touched in some way – big or small – remember him by reading a book that you may have put off reading, visiting a local coffee shop (the Lucky Goat on Capital Circle was his go to spot pre-pandemic), or playing his favorite jazz musician Thelonious Monk or, of course, a Prince song. Prince’s “Sometimes it Snows in April” was his favorite song. Listen, enjoy, and remember him. He will be missed but he will always be remembered. Susie Mozolic of Bevis Funeral Home is assisting the family with their arrangements. (www.bevisfh.com 850-385-2193)

Brian Allen Dudley, 45, loving son, father, and friend, passed away on January 9, 2021 after a long battle with Glioblastoma Multiforme. He was born on February 4, 1975 to Betty and the late Bruce Dudley. Because of his father&#8217;s work as... View Obituary & Service Information

The family of Brian Allen Dudley created this Life Tributes page to make it easy to share your memories.

Send flowers to the Dudley family.