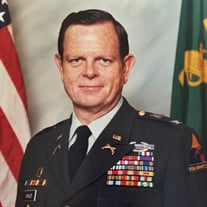 Colonel Brigham Samuel Shuler, US Army (Retired), passed away Saturday, February 19, 2022 in Bristol, Florida. He was born December 17, 1941, in Bainbridge, Georgia, to Sam and Ruth (Evans) Shuler of Hosford. Brigham grew up in Liberty County, attending Hosford JHS and graduating from Liberty County HS before embarking on a decades-long career with the military. Shortly after graduation from high school, Brigham joined the US Army. In 1961, while stationed at Ft Belvoir, VA, he met Charlotte Hutto, and they married in 1962 after a whirlwind courtship. They were later sealed for time and all eternity in the Salt Lake City Temple of The Church of Jesus Christ of Latter-day Saints. Brigham served faithfully in the US Army for many years. In 1962, he graduated from Infantry Officer Candidate School (OCS) at Fort Benning, GA, and sent to Ulm, Germany, where he served as an officer in the 4th Armored Division. Following this, he was assigned to the 1st Infantry Division in Vietnam in 1965, where he was wounded in combat and sent back to the US for hospitalization. After recovering from his injuries, he returned to Fort Benning, to serve as an instructor in the Weapons Department. From here, Brigham returned to Vietnam for a second tour of duty. It was during this assignment that he was promoted to the rank of Major. Returning home from Vietnam after his second tour, Brigham was assigned again to Fort Benning for duty with the 197th Infantry Brigade. Once this assignment was completed, he was sent to Brigham Young University in Provo, UT to complete his bachelor’s degree. Brigham was then assigned to the US Army Criminal Investigation Command in Washington, DC and then to the Office of the Secretary of Defense at the Pentagon. During this assignment, he was promoted to Lieutenant Colonel. Brigham was then transferred to Fort Knox, KY to command the Fort Knox Area Criminal Investigation Command and branch-transferred from the Infantry to the Military Police Corps (MP). After this assignment was completed, he was sent back to BYU to serve as a Professor of Military Science. He also taught several religion courses while at the university. After BYU, Brigham returned to Fort Knox, KY, to serve as the Installation Provost Marshall (Chief of Police). Here, he was promoted to the rank of Colonel. After four years in this position, Brigham retired from the US Army in 1992 and returned home to Liberty County. Since retirement from the military, Brigham served 16 years with the Bristol City Council and five years as the Administrator of the Calhoun and Liberty County Health Departments. He was also an active member of The Church of Jesus Christ of Latter-day Saints, serving in numerous leadership and teaching positions, and as a temple worker in the Orlando Temple for 13 years. Colonel Brigham Shuler was a highly decorated soldier. His military awards include the Combat Infantry Badge, Silver Star, Legion of Merit, Purple Heart and Bronze Star. Brigham is survived by his wife of sixty years, Charlotte (Hutto) Shuler, his daughter Beth Smith (Bruce), his grandson Brigham Shuler, and his granddaughter Loulie Williams (Mack), all of Bristol, Florida. He was preceded in death by his son, Mark, his parents, three brothers and two sisters. The family will receive friends, Tuesday, February 22, 2022 from 5:00 PM until 7:00 PM, at Bevis Funeral Home, 12008 NW Highway 20, Bristol, FL. A funeral Service will be held at 11:00 AM EST, Wednesday, February 23, 2022 at The Church of Jesus Christ of Latter-Day Saints, 12605 NW Myers Ann St. Bristol, FL. Interment with military honors will follow at Evans Cemetery, highway 67 South in Hosford, Florida. Todd Wahlquist with Bevis Funeral Home (850-643-3636, www.bevisfh.com) is assisting the Shuler family with their arrangements.

The family of Col. Brigham Samuel Shuler created this Life Tributes page to make it easy to share your memories.

Send flowers to the Shuler family.