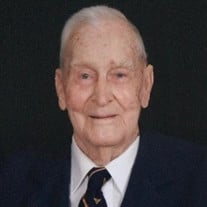 Burrel Edmund Sumner, USMC (Ret) age 100 of Blountstown, Florida died July 26, 2021, with his daughter Jolene by his side. He was 38 days short of his 101st birthday. He was a native of Florida and had resided in Blountstown for the past 16 years. He was the oldest of nine children born to the late Clyde and Hattie Sumner from Liberty County Florida. He served his country with distinction in the Marine Corps obtaining the rank of Captain and retired in 1960 after 20 years and nine months of service. Burrel served in combat as a Marine Aviator fighter pilot during WWII and the Korean conflict, accumulating over 7000 flight hours before retiring. He was awarded the Distinguished Flying Cross, Air Medal with two stars, Good Conduct Medal with two stars, plus several other Medals of Commendation. Burrel graduated from Pensacola Junior College and became their first Director of Purchasing in 1968. He retired from the college in 1983. In 1968, Junior Colleges in the State of Florida were authorized to have their own Board of Directors and Burrel became a member of the Florida Association of Public Purchasing Officers. In 1980 he served as their State President. After his second retirement, Burrel spent many years working with the Silver Eagles Association. This is the fraternal organization of the Enlisted Pilots in the Navy, Marine Corps and Coast Guard. He served as their National President in 1989-90 and was re-elected National President in 2001. He served three more years, relinquishing the office in October 2004. He was keenly aware of the fact that he was the only young man in Liberty County, Florida that had the opportunity to earn his wings as an Enlisted Naval Aviation Pilot. He received his wings as a Marine Staff Sergeant in 1943. In 1993, Burrel became a Distinguished Wing Member of the Pensacola S.E.A. Wing. At the 1994 National Convention he was awarded the Mr. Silver Eagle Plaque. At the time of his death, he was President Emeritus of the Silver Eagle Association. After retiring from the Marine Corps in 1960, Burrel spent ten years as troop Committee Chairman for Boy Scout Troop 646 sponsored by the Warrington United Methodist Church. He was also active in the Church serving in several different chairmanship positions. For many years Burrel was a volunteer at the National Museum of Naval Aviation in Pensacola and enjoyed working in the aircraft restoration department. He accumulated in excess of 5,000 hours before Hurricane Ivan destroyed their Navy Point home in 2004. The damage required a drastic move to Blountstown, Florida for Burrel and his wife, Alleen. Burrel was preceded in death by his loving wife of 65 years, Alleen Roberta Sumner, his brothers, Amos Sumner, Carl (Junior) Sumner, Lewis Sumner and his youngest granddaughter, Sharon Ebersole. He is survived by two daughters and their husbands; Cheri and Quentin Henderson of Blountstown, Fl; Jolene and Ron Hamilton of Mary Esther, Fl; and one son and daughter-in-law, Craig and Linda Sumner of Huntsville, Al. He is also survived by six Grandchildren and fourteen Great Grandchildren as well as three brothers, two sisters, and a host of in-laws, nieces, nephews and friends. The funeral service will be held at 12:00 noon EST on Friday, July 30, 2021, at the Lake Mystic Baptist Church, 15292 Co Rd 12, Bristol, FL with Pastor Kyle Peddie officiating. Visitation will begin ¬¬¬1 hour prior to the service. Pallbearers will be Aaron Sumner, Marc, Brady and Jason Tomlinson, Jonathan Chandler, George Kitchens, Nathan Ebersole and Dustin Pettis. Burial with Military Honors will be in the Lake Mystic Cemetery three miles south of Bristol, Florida on Highway 12. Donations in memory of Burrel may be sent to Pensacola Naval Museum, 1750 Radford Blvd Suite C, NAS Pensacola, FL 32508 or Blountstown United Methodist Church, P.O. Box 299, Blountstown, FL 32424 where he was a member for many years. Todd Wahlquist with Bevis Funeral Home in Bristol (850-643-3636, www.bevisfh.com) is assisting the Sumner family with their arrangements.

Burrel Edmund Sumner, USMC (Ret) age 100 of Blountstown, Florida died July 26, 2021, with his daughter Jolene by his side. He was 38 days short of his 101st birthday. He was a native of Florida and had resided in Blountstown for the past 16... View Obituary & Service Information

The family of Burrel Edmund Sumner created this Life Tributes page to make it easy to share your memories.

Send flowers to the Sumner family.