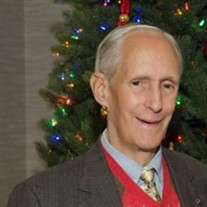 TALLAHASSEE, FL – Calvin Pickard Ogburn, 85, a long-time figure in housing and redevelopment, died November 15. The only child of Lundie Calvin Ogburn and Marie Pickard Ogburn, he was born June 9, 1935, in Philadelphia, PA, where his father was in medical school. During WWII, he lived on or near military bases and liked to tell of being able to play and look for submarines from the Don Cesar Hotel in Pass-a-Grille which had been turned into an army hospital. After the war, he moved with his family to Winston-Salem, N.C. He was educated at Reynolds High School in Winston-Salem, Oak Ridge Military Institute, the University of North Carolina at Chapel Hill, and Guilford College. In his early 20s, his father remarried after the death of his mother, and he gained 3 step siblings – a brother and two sisters. He began his work career in Winston-Salem with the Winston-Salem Housing Authority, which managed the federally funded Urban Renewal program. He worked in that field in Waycross, GA, coming to Tallahassee in 1970. As the first director of the Tallahassee Urban Renewal program, he acquired the land where the Civic Center now stands as well as the land for the Center for Continuing Education and the Law School Annex. Soon his duties included Code Enforcement for the city along with managing the Housing Authority and becoming the first director of the Downtown Improvement Authority. As the city structure changed, he became the Executive Director of the Tallahassee Housing Authority. After retiring in 1993, he was named Executive Director of the Educational Facilities Authority, whose mission was to provide housing for institutions of higher learning in Leon County. During this time Southgate Campus Centre and Heritage Grove were built under his leadership and managed by the Authority. He retired a second time in 2013. He was extremely proud of his long and distinguished military service. In 1955 he enlisted in the Army where he was an air traffic controller on both Army and Air Force bases. After two years of active duty, he went into the reserve program, moving from the Army to the Air Force and finally the Coast Guard, where his reserve unit replaced active duty personnel in Panama City on weekends performing search and rescue missions. He retired as a Coast Guard Commander completing over 30 years of loyal service. In his professional career he was a past president of the Georgia Association of Redevelopment Officials and the Florida Association of Housing and Redevelopment Officials. His civic associations include past president of the Waycross, GA, chapters of the Jaycees and Kiwanis Club, and the Tallahassee 100 Club and the Tallahassee Town Club. He was a current member of Tallahassee Northside Kiwanis Club, Capital City Tiger Bay, and Faith Presbyterian Church. A man of wry wit who always looked like he might be planning some mischief, he turned his housing passions to model railroading after retirement. He built a train shed in his back yard, bargained with his wife about shared space in the dining room, and always wanted to know what fellow enthusiasts were doing with their trains. Of course, he was a member of the Big Bend Model Railroad Association. He was predeceased by his parents; stepmother, Ruth; son, Gordon Calvin; stepbrother, Tom Thornton, and stepsister, Molly Philo. He is survived by his wife of 61 years, Lou, and his daughter, Ruth; stepsister, Elisabeth; niece Elle (Gator); seven first cousins and many close friends. Due to current health concerns, the ceremony will be private. Beginning Nov. 25th the service will be available for streaming on the Bevis Funeral Home website. In lieu of flowers, a memorial donation may be made to the Tallahassee Museum of History and Natural Science, 3945 Museum Drive, Tallahassee, FL 32310 or the Northside Kiwanis Club, c/o Diane Reagans, 4304 Amber Valley Rd, Tallahassee, FL 32312. Susie Mozolic of Bevis Funeral Home is assisting the family with their arrangements. (www.bevisfh.com 850-385-2193)

TALLAHASSEE, FL &#8211; Calvin Pickard Ogburn, 85, a long-time figure in housing and redevelopment, died November 15. The only child of Lundie Calvin Ogburn and Marie Pickard Ogburn, he was born June 9, 1935, in Philadelphia, PA, where his... View Obituary & Service Information

The family of Calvin Pickard Ogburn created this Life Tributes page to make it easy to share your memories.

Send flowers to the Ogburn family.