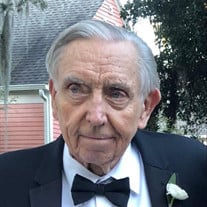 Carl Edward Spaeder, Jr. died peacefully on January 27, 2022 with his daughter at his side. He passed wrapped in love and friendship gathered over a long, rich life. Carl was born in Meadville, PA on March 29, 1935. He attended Holy Rosary and Cathedral Prep in Erie, PA and he was proud to have life-long relationships with members of his kindergarten class. He followed in his father’s footsteps in becoming an engineer, earning his first degree at Penn State University. There he established more life-long friendships, but also met his future wife, Carol Schaub. The two settled in Monroeville, PA, as Carl started his career with US Steel and pursued advanced degrees in metallurgical engineering earning his Masters at Carnegie Mellon University and his PhD at the University of Pittsburgh. They adopted three children, raising David, Mark, and Anne in a loving home. Carol’s death in 2008 forced Carl to forge a new path without his beloved wife. He found community at Brookdale Independent Living in Mars, PA before moving to Tallahassee, FL in 2016 to be closer to Annie. While in Tallahassee, he lived at Mulligan Park Senior Living and the Villas of Killearn Lakes. The family would like to thank the staff and caregivers in these communities for their exceptional kindness and compassion. Carl enjoyed fellowship at Good Shepherd Catholic Church, playing bridge, and spending time with family. Carl lived his life steadfast in his faith and looked forward to joining his departed family and friends after death. He is preceded in death by his parents, Carl and Genevieve Spaeder, his siblings Jerry Spaeder and Mary Jean Olivelli, and last but not least: his loving wife, Carol Spaeder, who preceded him in 2008. Carl is survived by his children, David (Elizabeth Lehfeldt) Spaeder, Mark (Dawn) Spaeder, and Annie (Joseph) Kelley; his grandchildren, Katelin (Alex) Fischer, Ian Kelley, Joey Kelley, Matthew Spaeder, Dylan Spaeder, and Jack Spaeder; his sister Marie (Frank) Haas; many nieces and nephews; and countless treasured friends. All were blessed to have known him. A Funeral Mass will be celebrated at Good Shepherd Catholic Church (665 Thomasville Rd, Tallahassee, FL) on Friday, February 4, 2022 at 11:00 am. The Rite of Committal and burial next to his loving wife will be at a later date this summer in Pittsburgh, PA. In lieu of flowers, please consider a donation to Maryknoll, a Catholic non-profit, or to Smile Train, as both organizations were dear to Carl. Breanna Green of Bevis Funeral Home is assisting the family with their arrangements. (850-385-2193 or www.bevisfh.com)

Carl Edward Spaeder, Jr. died peacefully on January 27, 2022 with his daughter at his side. He passed wrapped in love and friendship gathered over a long, rich life. Carl was born in Meadville, PA on March 29, 1935. He attended Holy Rosary and... View Obituary & Service Information

Send flowers to the Spaeder, family.