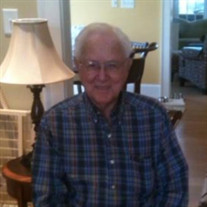 Carlisle Appleby Byrd, Jr., age 89, passed away on November 5, 2020 in Tallahassee. He was born in DeLand, Florida to parents Mary and Carlisle Appleby Byrd, Sr. Carlisle or Buddy, as he was known to family and friends, was a true Floridian. Buddy and his sister Barbara were lovingly raised by Mary and Carlisle, Sr. in the small town, Seville, Florida. He graduated in 1952 from the University of Florida with a BS degree in Animal Husbandry and Agriculture. Buddy was in ROTC at the University of Florida and immediately went into active duty as an officer in the US Army, at Fort Eustis in Virginia. On November 22, 1952, he married his soul mate, Lillian Jean Davis at Trinity Methodist church in Tallahassee, Florida. After the wedding, Buddy went back to Virginia and Lillian went back to complete her nursing studies at Emory. The new couple lived in Virginia and had their first child, Mark, there. After completing his military service in Virginia, the Byrd family called Dade City Florida home from 1954 until 1963. In Dade City, Carlisle started a lifelong career in the Agriculture Industry. Mary Beth, Gene and Nancy were all born in Dade City. The family thrived and made many dear friends and moved to Clermont, Florida in 1963. In Clermont, Carlisle was an active leader as a member of the Rotary Club, the First United Methodist Church and was elected to the Clermont City Board as a Counselman. Clermont was home until Buddy and Lillian moved to Westminster Oaks in 1999. Carlisle was a devoted Christian, with memberships in Methodist churches in every location that he and Lillian called home. After moving to Westminster Oaks, he was an active member at Trinity United Methodist Church of Tallahassee and Ochlockonee Bay United Methodist Church. For more than 20 years, Buddy and Lillian lived in Tallahassee at Westminster Oaks from November through April and from May through October they resided at their home in St. Teresa, Florida. Thus, the devoted couple was active in both Methodist churches. At Trinity, he volunteered his time as a Sunday School teacher and played the bells as a member of their Bell Ringers and Heavenly Chimes bell choirs. In retirement, he again volunteered his time at the Leon County Extension Office and Westminster Oaks as an advisory board member. Of all his many achievements, becoming certified as a Master Gardener was particularly fulfilling. Buddy is remembered for always using his talents anywhere he spotted a plant in need, living by the motto “dig a five dollar hole for a fifty cent plant.” Carlisle is survived by his loving wife, Lillian Davis Byrd; children, Mark Carlisle Byrd, Mary Beth Curry (David), Gene Byrd (Eve), Nancy Weitnauer (David); grandchildren Trey (Sarah), Susan (Kirk), Maya, Graham, Zach, Davis, Sam, and Claire; great-grandchildren Fort, Grace, Abby and Eliza; dear sister Barbara Byrd Morris (Bobby) and many nieces, nephews, and cousins who will also miss him greatly. A small, private family service was held at Trinity United Methodist Church on November 7, 2020. Memorial services will be held once restrictions are lifted. ***In lieu of flowers, the family requests that memorial contributions in memory of Carlisle be made to their charity of choice.*** Breanna Green of Bevis Funeral Home is assisting the family with their arrangements. (850-385-2193 or www.bevisfh.com)

The family of Carlisle Appleby "Buddy" Byrd, Jr. created this Life Tributes page to make it easy to share your memories.

Send flowers to the Byrd, family.