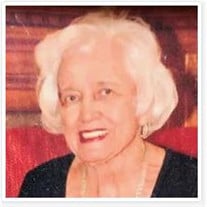 Catherine Dalrymple sailed through ninety-six wonderful years on a regimen of green beans, pot roast, hundreds of books and long walks with her girls and their dog Freckles. She died peacefully on July 16th, surrounded by family. She led a life full of love and laughter, family and friends. Catherine Mae Chesser was born to Myrtle Catherine and Arthur Olen Chesser in Birmingham, AL on August 25,1924. The Depression notwithstanding, Catherine remembered a happy childhood full of barbeque and oatmeal cookies from her daddy’s restaurant, amateur sporting events for which she sold tickets to neighborhood kids (what a blossoming entrepreneur!), church cotillions and afternoons chasing the ice truck on a hot day in hopes of obtaining a chunk of ice from the ice man. After graduating high school, she went on to the University of Alabama and later, in order to pursue her love of travel, Catherine signed on with Capitol Airlines as a flight attendant based in NYC. Her love of adventure continued with flying lessons and her daring solo flight piloting a Piper Cub. Catherine authored “Grandmommy Remembers” – a memoir comprised of stories of her childhood, raising her daughters and many adventures traveling with her husband and treasured friends. It was in the lobby of the Tutwiler Hotel in Birmingham, while waiting for a flight, her soon to be betrothed, Dorrance, saw her and was smitten at first sight…he in his Army greens and she in her flight uniform. He approached her with an offer to share a drink. Catherine, who didn’t partake, declined by stating she wasn’t allowed to drink before flying. Then, Dorrance, in attempt to keep the conversation going, offered her a cigarette...which she also declined, stating they weren’t allowed to smoke before flights either. Apparently, he was able to figure out something to which she was receptive, as they did go on a date to the movies. Catherine was quite impressed when Dorrance purchased for her an entire pack of gum instead of what she said most guys did – which was to offer only one piece. Not long after they were married, they moved from Birmingham to Tallahassee where Dorrance began his career with Crawford and Company and Catherine became president of the Junior Women’s Club and administrative aide and analyst for the Florida Legislature. They started a family and Catherine became loving mother to Cathy, Calland, Cindy and Carol. Catherine was quite ambitious with her desires to create all types of opportunities for her children. She loved travel, science, history and the outdoors and instilled in all of her daughters a passion for the same. She built basketball hoops, taught them how to kick footballs, helped with science projects, led Brownie and Girl Scout outings, enjoyed visits to the Tallahassee Junior Museum and Wakulla Springs glass bottom boat rides, picnics, camp outs and the like. She was an expert kite flyer. Catherine was all in for an adventure. We said “Let’s go” and she would say “I’m ready!” She loved to tell the story of her ride on Miss Fancy, the elephant at the carnival, Dorrance would always shake his head and state, “you never rode Miss Fancy. Miss Fancy was a MEAN elephant.” Oh, how that would aggravate Catherine, for she knew she did INDEED ride Miss Fancy. There were vacations to Kiddie Land in Birmingham, the Smokey Mountains and Panama City Beach. There were rides on paddle wheels, sail boats, roller coasters and deep-sea fishing excursions. There were popcorn balls, The Wizard of Oz; and at Christmas time rides in the car with PJs on and hot cocoa in hand to gaze at all of the Christmas lights. The kitchen table was always dressed with a fresh bloom or two, cut from the plethora of flowers she grew. Catherine was a strong spitfire of a woman. She loved to read, travel and spend time with her daughters and granddaughters. There were hundreds of bedtime stories, spend the night parties, oatmeal cookie baking, blackberry cobbler making, paddle wheel boat designing and dandelion necklace creations. She lived independently into her nineties, traveling, visiting with family and friends, playing bridge, and going on outings. She lived the last four years of her life in Louisville, KY, being lovingly cared for by her daughter, Cindy, and son-in-law, Bill. She was a force to be reckoned with and a mother, grandmother and great grandmother that will be loved and missed for the rest of our days. “Night Night sweet Mama, have sweet dreams, we love you, sleep tight.” We will love and adore you until we meet again on the streets of gold. Tallahassee Loving Care provided by: Cory Miller, Iris Robinson, Bridgette Welch, and Sabrina Wester. And Loving Care in Louisville: Cyndi Hendricks, Caroline Butler, Sherri Smith, Millie Neff. Survived by: Catherine Dalrymple Bright (Frank), Calland Dalrymple Abernathy (Tom), Cynthia Dalrymple Shannon (Bill), Kelsey Shannon, Kara Shannon, Carol Dalrymple Cartee (Gray), Ashley Cartee Hall (Brian), Hadley Catherine Hall, Willa Reese Hall, Catherine Cartee. The family will receive friends from 1:30 PM until service time at 2:30 PM, Thursday, July 22nd at Bevis Funeral Home, 200 John Knox Road in Tallahassee. Interment will immediately follow at MeadowWood Memorial Park, 700 Timberlane Road in Tallahassee. Rocky Bevis of Bevis Funeral Home of Tallahassee (www.bevisfh.com) is assisting the Dalrymple family with their arrangements.

Catherine Dalrymple sailed through ninety-six wonderful years on a regimen of green beans, pot roast, hundreds of books and long walks with her girls and their dog Freckles. She died peacefully on July 16th, surrounded by family. She led a life... View Obituary & Service Information

The family of Catherine Chesser Dalrymple created this Life Tributes page to make it easy to share your memories.

Send flowers to the Dalrymple family.