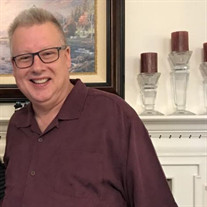 Charles Michael Bussell, affectionately known by “Michael” or “Mike,” passed away on Tuesday, March 1, 2022 at the age of 64. He was born on August 16, 1957 to parents Charles and Maxine Bussell in Tallahassee, Florida where he would spend the majority of his life. Michael earned his Masters in Religious Studies from Florida State University and was the Registrar at Tallahassee Community College for 15 years. True to his passion for higher education, Michael later earned the title of Executive Director for the Department of Higher Education Technology within the Florida Colleges system. In addition to his passion for education, Michael was a walking history book. He spent the majority of his free time reading. He enjoyed singing and is remembered by many for his voice. Michael was a man of strong faith – he fulfilled the role of a substitute pastor at numerous churches, most often at Grace Lutheran. More than anything, Michael loved his family and treated everyone else like they were family, too. Survivors include his loving wife, Debra “Debi” Bussell; children Meghan Bussell Artman (Kristin) and Erin Bussell; grandchildren Aidan, Max, Payton, and Charlie; brother Gary Bussell (Maureen) and last but not least, his beloved dachshunds Topper and Gibbs. Michael is now reunited with his parents, Charles and Maxine Bussell, who preceded him in 2020. A graveside service will be held at Tallahassee Memory Gardens on Monday, March 7, 2022 at 11:00 a.m. In lieu of flowers, memorial contributions may be made to Hope Hospice or the American Cancer Society. Breanna Green of Bevis Funeral Home is assisting the Bussell family with their arrangements. (850-385-2193 or www.bevisfh.com)

The family of Charles "Michael" Bussell created this Life Tributes page to make it easy to share your memories.

Send flowers to the Bussell family.