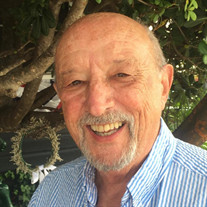 Charles “Chuck” Robert Cutajar passed on to his eternal rest Saturday, December 11, 2021 in Tallahassee, FL surrounded by his family. Long time Tallahassee resident Chuck was born August 20, 1939 in Detroit, Michigan to Carmelo and Teresina Cutajar. He lived with his beloved mother and sisters, Mary and Rose. He attended St. Theresa Catholic High School while growing up in Detroit. He attended Florida State University and received his BS in Baking Sciences. While at FSU he served as a member of the Men’s Judiciary, President of the Newman Club, President of the Bakers’ Club, selected for Gold Key and Alpha Kappa Psi Honorary and named the “Most Outstanding Newman Club President in the Southeast”. He joined Pi Kappa Phi fraternity and met his lifelong Pi Kappa Phi brothers. He served as Pi Kappa Phi Pledge Class President and Chairman of the Standards Committee. Upon graduation he returned to Detroit where he began working for Hostess Cakes then changing jobs to Chrysler where he worked for three years as an industrial engineer. Realizing his advancement abilities were limited he accepted a position at the National Bank of Detroit. He was employed for over 12 years at the bank where he advanced to the position of Vice President of the Trust Division and earning his Master’s degree from University of Detroit Mercy. Following his longtime dream to return to Tallahassee and his Alma Mater, Florida State University, he relocated his family to Tallahassee in 1981. His first business venture in Tallahassee was a fencing business, which he jointly ran with a fraternity brother. He went on to independently open several successful businesses including Capital Awning Company, Capital Chem Dry, Capital Quality Services and a tax preparation service. He devoted much of his time and efforts to Pi Kappa Phi fraternity as an alumnus especially the FSU chapter, Beta Eta. He received the first “Mr. Beta Eta Award” for demonstrating “considerable and sustained service toward the promotion and advancement of the chapter.” He was also awarded the National Council of Pi Kappa Phi “Merit Citation” which recognizes one alumnus every two years among all living members for exceptionally meritorious service. Much of his free time was also spent with his “local” friends at Blue Mountain Beach considering this his home as well. Among his many passions was Florida State University football. He never missed a Florida State home football game where he enjoyed lively tailgate parties. He enjoyed investing in the stock market, dining at Azu and Corner Pocket, playing golf, traveling to FSU bowl games, singing fraternity songs, talking politics, spending time with family and friends, and donating to numerous charities. He treasured his family, friends, and Catholic faith. He always glowed when he spoke of his sisters Mary and Rose, his daughters Cheryl and Christie, their husbands Jerry and Chris and his grandchildren. He is survived by his daughters Cheryl Latimer (Jerry) and Christie Stavres (Christopher), grandchildren Hayden Stavres (Shelby), Jacob Stavres, Jordan Latimer, Charles Latimer, Mary Terese Stavres, Peyton Latimer, Corey Stavres, Silas Latimer, Blaise Latimer and Anthony Stavres; nephew Chris Siegle; longtime best friend Nancy Johnson; numerous nieces and nephews, countless beloved Pi Kappa Phi fraternity brothers and many other dear friends. Services will be held Saturday, December 18, 2021 at Good Shepherd Catholic Church with a rosary at 10:30 and funeral mass at 11:00. In lieu of flowers, donations may be made to Open Door Women’s Clinic in Chuck’s honor. Todd Wahlquist with Bevis Funeral Home (850-385-2193, www.bevisfh.com) is assisting the family with their arrangements.

The family of Charles "Chuck" Robert Cutajar created this Life Tributes page to make it easy to share your memories.

Charles “Chuck” Robert Cutajar passed on to his eternal rest...

Send flowers to the Cutajar family.