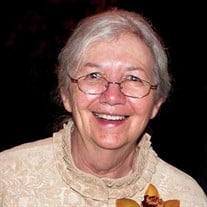 Charlotte Etheridge Holland, age 82, departed this world surrounded by her family on March 15. A fifth generation Georgian, she was the daughter of John Wilson and Melba Chewning Etheridge of Atlanta. After graduating from Murphy High School (1956) in Atlanta, she matriculated to Emory University where she was a member of the Delta Iota chapter of Alpha Chi Omega sorority. Charlotte excelled academically and was initiated into two national honor societies: Pi Sigma Alpha (National Political Science Honor Society) and Mortar Board (recognizing college seniors for superior achievement in scholarship, leadership and service). Upon completion of her Bachelor of Arts (1960) and Master of Arts (1962) degrees in political science, she taught political science at Emory at Oxford from 1962 to 1965. While at Emory University, she met Charles J. Holland, whom she wed on August 3, 1963. After relocating multiple times with her husband to St. Louis, MO, Ft. Sill, OK, and Indianapolis, IN as he completed his military service and medical training, the couple moved with their two young daughters to Tallahassee, FL in 1972. In Tallahassee, Charlotte volunteered with numerous community organizations – especially during fundraising events – such as the WFSU Auction and the Golden Galas for Tallahassee Memorial Healthcare and the TMH Foundation. She became a Master Gardener and was a member of the Tallahassee Garden Club. She shared her expert knowledge of gardening and her organizational skills with Goodwood Museum and Gardens where she was instrumental in establishing the library (now disbanded). She was also the Assistant Secretary for the Red Hills Horse Trials when the event was in its infancy. In addition to her own interests, Charlotte supported her daughters’ club activities including serving as secretary/treasurer of a local US Pony Club chapter. Charlotte was a devoted mother and lifelong learner. She bestowed her love of reading, fondness for cooking, and appreciation of nature in her daughters. In her later years, she could most often be found doting on her beloved golden retriever, Bridger. The two were commonly seen in the car together enjoying visits to the Farmers Market. Charlotte is survived by her husband of 57 years, Charles Jackson “Jack” Holland, MD, of Tallahassee, her brother John Wilson “Jack” Etheridge, Jr. (Eva) of Atlanta, daughter Lindsay Jackson Holland, PhD, of Chattanooga, TN, daughter Meredith L. Holland Osmus, MAEd, of Valdosta, GA, brother-in-law James B. Holland (Katherine) of Tallahassee and several nieces and nephews. The family wishes to express their gratitude to long time family friend Margaret Irene Bivins for her generous and loving support during Charlotte’s final days, Susie Mozolic of Bevis Funeral Home for her professional and compassionate guidance, and to the staff at Big Bend Hospice House for their dedication to Charlotte’s comfort and care. In lieu of flowers, the family requests donations be made in Charlotte’s name to Goodwood Museum and Gardens or Big Bend Hospice House. The family will welcome friends for a Celebration of Life Reception (socially distanced) on Friday, April 16 at the Jubilee House, Goodwood Museum and Gardens, from 4:00 – 6:00 pm. Susie Mozolic of Bevis Funeral Home is assisting the family with their arrangements. (www.bevisfh.com 850-385-2193)

Charlotte Etheridge Holland, age 82, departed this world surrounded by her family on March 15. A fifth generation Georgian, she was the daughter of John Wilson and Melba Chewning Etheridge of Atlanta. After graduating from Murphy High School... View Obituary & Service Information

The family of Charlotte Etheridge Holland created this Life Tributes page to make it easy to share your memories.

Send flowers to the Holland family.