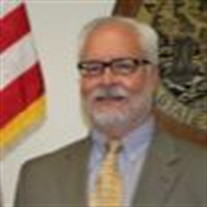 It is with heavy hearts that we announce Chesterfield Harvey Smith, Jr. (Chet), 69, died suddenly on September 25, 2021. Chet was born in Bartow, FL, on August 24, 1952, to Vivian Parker and Chesterfield H. Smith. He attended the Bolles School (class of 1971) and later received a degree in Asian Studies from the University of Oregon. Chet received his law degree from the University of Miami Law School in 1987 while working at the Citizen Dispute Settlement Center in Miami, FL. Chet met his loving wife, Patricia, while living in Coral Gables, FL, and the couple married in 1984. He began his legal career at Rasco Reininger, later joining Baker McKenzie. Chet’s 31-year tenure at Florida’s Office of the Attorney General (OAG) began in Hollywood, FL. It continued in Tallahassee in 1994, when Chet and Patricia moved there with their two children, Chesterfield H. Smith, III and Taylor Vivian Smith. At the OAG, Chet served under five attorneys general and seven governors. He spent the majority of his tenure in the Office’s largest division, serving as a Bureau Chief of the Civil Division for nearly 18 years, where he led and supervised significant class actions seeking to change the way the state did business. The cases were cumbersome and often spanned decades -- a task many felt was impossible, but Chet saw as an opportunity and a welcome challenge. He was admitted to practice law in all state and federal courts in Florida, the United States Appeals Court for the Eleventh Circuit, and the U.S. Supreme Court. Chet did not seek notoriety or fame, nor did he seek honor for himself. Instead, he sought to elevate each person he had the opportunity to work with. Chet’s lasting legacy is seen in the many attorneys he hired and mentored who have gone on to become leaders in their field -- including some following in Chet’s footsteps with a career in public service. Many in Tallahassee’s legal community will feel our loss. Those who worked alongside Chet will continue to honor his legacy by practicing law the way he did, with an unwavering commitment to defend the law while holding oneself to the highest ethical standards. While he held many professional titles at the OAG, from Assistant Attorney General to the Associate Deputy Attorney General, his favorite titles were husband, Dad, and “Papadam.” Whether he was making his Dad’s famous recipe -- “The Dish,” touring the winding roads outside of Blue Moon cabin on a tandem road bike with his wife, or enjoying his first grandchild, Chet was happiest when he was surrounded by his family and was filled with pride and immense love and devotion for his wife and children. Chet knew how to keep his family and friends on their toes. From barefoot water skiing and diving at Bolles to dirt bike riding in the Red Hills of Tallahassee to distance running the buttes of Oregon, Chet was always active. His passion was cycling, and he enjoyed many happy memories on the roads and trails of Tallahassee riding with his wife, son, and friends. Chet’s other two-wheeled passion was BMW motorcycles and he was always ready for a trip with friends to zip around the Blue Ridge mountains. He is survived by his wife of 37 years, Patricia Gudis Smith; son, Chesterfield Harvey Smith, III (Elizabeth) of Tallahassee, FL; daughter, Taylor Vivian Smith of Atlanta, GA; beloved grandson, Chesterfield Harvey Smith, IV of Tallahassee, FL; sister, Rhoda Kibler (Sandy) of Tallahassee, FL; and nephew, Parker Smith Cannon of Sarasota, FL. In lieu of flowers, the family requests that donations be made in Chet’s memory to Apalachicola Riverkeeper or WFSU. A celebration of life will be held on Saturday, October 2, 2021, at 11 am at The Space at Feather Oaks, 6500 Miccosukee Rd, Tallahassee, FL 32309 Rocky Bevis of Bevis Funeral Home of Tallahassee(www.bevisfh.com) is assisting the Smith family with their arrangements

It is with heavy hearts that we announce Chesterfield Harvey Smith, Jr. (Chet), 69, died suddenly on September 25, 2021. Chet was born in Bartow, FL, on August 24, 1952, to Vivian Parker and Chesterfield H. Smith. He attended the Bolles School... View Obituary & Service Information

The family of Chesterfield Harvey "Chet" Smith Jr. created this Life Tributes page to make it easy to share your memories.

It is with heavy hearts that we announce Chesterfield Harvey...

Send flowers to the Smith family.