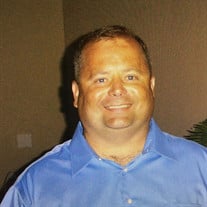 Clifford “Toby” Dewayne Ferguson, 51, of Medart, Florida, passed away on Tuesday, August 17, 2021, in Tallahassee. Toby was born on April 30, 1970 in Orlando, Florida, and is the son of Helen Luper of Panacea, Florida, and the late George Ferguson of Tallahassee, Florida. Toby received his welding certifications from the Tulsa School of Welding, in Tulsa, Oklahoma, in 1990 and was very adept at meeting life’s challenges. Due to his unfortunate fate of kidney failure at a young age, he took nothing for granted. He lived everyday like it was his last giving the best of who he was, day after day after day! He was very positive, never complained, enjoyed making memories and cherished the time he spent with loved ones. He was a very loving and devoted husband, father, Poppa, son and brother, one of the best friends that you could ever have and always just a phone call away! He was the “Go-To” for family and friends for whatever was needed and spent a tremendous amount of his personal time and energy helping people freely with whatever the need may be! He loved to play and have fun, and he kept us laughing! He loved the movies, actors Jason Statham and Heath Ledger, Street Outlaws, deep-sea fishing, being on the water, Sprite Zero, grilling, woods riding, fast cars and achieving his goals! He is survived by his wife of 30 years, Monica Whaley Ferguson, of Medart; daughters Dana Ferguson (Ryan Miller) and Meagan Ferguson, and a granddaughter, Marleigh Manges, all of Medart; his mother, Helen Luper, of Panacea, Florida; his sisters Ronda (Squire) Connett of Ochlocknee Bay and LaRae ( Ron) Heffner of Tallahassee, Florida; brothers, John (Lisa) Luper, of Crawfordville, Florida, and Christopher ”Bud” Ferguson, of Tallahassee, Florida; brother-in-law, Don Whaley, of Medart, along with a host of aunts, uncles, nieces, nephews, cousins and dear friends. He was preceded in death by his father, George Ferguson, of Tallahassee, Florida, maternal grandparents, the late Henry and Lonie Taylor, of Panacea, Florida and paternal grandparents, the late Huse “Tony” and Mary Ann King, of Tallahassee, Florida. A memorial service to celebrate his life will be held at a later date. Donations can be made to the National Kidney Foundation online at www.kidney.org, or mailed to 30 East 33rd Street, New York, NY 10016. David Conn and Kimberly Crum with Bevis Funeral Home of Crawfordville are assisting the family with arrangements. (850-926-3333, www.bevisfh.com)

The family of Clifford Dewayne "Toby" Ferguson created this Life Tributes page to make it easy to share your memories.

Send flowers to the Ferguson family.