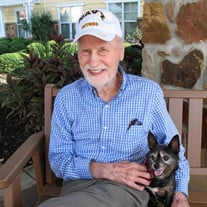 Clifford Eugene Nilson, Sr., died March 27, 2020, at the Village at Gleannloch Farms in Spring, Texas. He was 94 years old. He was born in Kansas City, Missouri on March 7, 1926. His parents, Anna and George Nilson, were Swedish, his mom born to Swedish parents in America and his dad immigrated from Sweden in 1915. Cliff was active in the Boy Scouts and earned the rank of Eagle Scout. While enrolled in Missouri University, he enlisted as a Midshipman in the Navy to fight in WW II. His dad had fought in WW I after immigrating to America. At age 19, just before the war ended, Cliff was commissioned as an Ensign. He spent 23 years in the Navy, beginning his service on wooden mine sweepers. Though he began his service at sea, he requested and received flight training, earning his wings as a Naval Aviator. As an aviator during the Cold War, he chiefly flew super constellations and airships on the east coast performing anti-submarine surveillance and early warning reconnaissance flights. He was rated for all kinds of aircraft, lighter and heavier than air. He also served as a ship’s engineer, public information officer, director of flight safety, and flight instructor. He was mainly stationed in Pensacola, Florida, Lakehurst New Jersey, Pax River Maryland and Argentia, Newfoundland. He retired as a Lieutenant Commander in 1966, while serving as a flight instructor at Pensacola After retiring from the Navy, Cliff completed his undergraduate degree at the University of West Florida in 1968. Cliff then attended law school at the University of Florida and following graduation he worked for the City Attorney’s office in Jacksonville. From there Cliff took a position with the Aviation Safety Office of the Florida Department of Transportation in Tallahassee. He retired from the State of Florida after 20 years of service in 1991. Cliff was known for his candor and humor. He loved reading the newspaper and managing his real estate and investments. He was a believer in having streams of income which were not job-related. As a teenager, Cliff spent a lot of time working on houses that his dad bought and improved. He carried this tradition into his own family as well. His famous quote was that “one day this house will put you through college”. Cliff and his wife Jane lived in Tallahassee for more than 46 years, 20 years in Killearn Estates and 26 years in Bucklake Estates. They made and enjoyed good friends in both neighborhoods. Many of his children, including Clifford Jr., Shirley, Phillip and Michael, also lived in Tallahassee during this time. Cliff and Jane loved to travel and take cruises to places around the world. Cliff suffered from dementia during his later years. Cliff and Jane celebrated their 50th wedding anniversary in December of 2017 and shortly thereafter, in early 2018, Jane passed away. Following Jane’s passing Cliff moved to Spring, Texas, where he could be close to his daughters, Donna and Shirley. He was a popular resident at The Village and enjoyed spending time with his daughters and son in law. He is survived by his children, Donna Lou Banzhaf Dall (Jim), Clifford Eugene Nilson, Jr. (Lynn), Shirley Jean Nilson, and Michael Eric Coppage (Mary), grandchildren Tricia Lynne Banzhaf Romeijn (Frank), Robert David Banzhaf (Angela), Jonathan Clifford Nilson (Dalis), William Austin Nilson (Cristina), Sophie Coppage, and Jake Coppage and great-grandchildren Cole Romeijn and Parker, Austin and Lucille Banzhaf. Cliff was predeceased by his dad, George David Elver Nilson, his mother Anna Marie Carlson, his sister Bernice Esther Oliver, his wife Anita Jane Nilson, and his son Phillip Craig Coppage. A memorial service will be held 2:00 p.m. Tuesday, October 13, 2020 at St. Peter’s Anglican Cathedral. Burial of cremains will follow at 4:00 p.m. at Roselawn Cemetery with Military Honors. Susie Mozolic of Bevis Funeral Home is assisting the family with their arrangements. (www.bevisfh.com 850-385-2193)

Clifford Eugene Nilson, Sr., died March 27, 2020, at the Village at Gleannloch Farms in Spring, Texas. He was 94 years old. He was born in Kansas City, Missouri on March 7, 1926. His parents, Anna and George Nilson, were Swedish, his mom born... View Obituary & Service Information

The family of Clifford Eugene Nilson Sr. created this Life Tributes page to make it easy to share your memories.

Send flowers to the Nilson family.