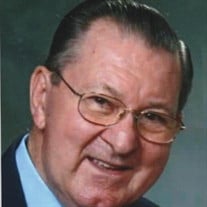 Clifford Laverne Todd, 90, entered into the presence of his Lord and Savior, Jesus Christ, on April 5, 2022. Cliff was the second of three sons born to H. Lloyd, Sr. and Molly Todd in Monterey, Tennessee. The family moved to Miami, Florida, when he was 10 years old. Miami was home to Cliff for the next 41 years and was where he married his high school sweetheart, Betty Monticino, and raised their four daughters. Cliff joined the United States Air Force in 1950, was promoted to staff sergeant, and taught photography. His last year in the Air Force was spent in Korea working in photo labs processing film brought in from aircraft on reconnaissance missions. Cliff worked 29 years with the Miami Dade Fire Department where, in addition to fighting fires, he was highly respected and loved as the cook. In 1982, Cliff and Betty retired and built their lovely home in Tallahassee. There, Cliff worked with the United States Postal Service for another 12 years until his final retirement in 1999. Cliff loved to stay busy with hobbies and activities over the years, including photography, camping, traveling, flower gardening, construction, and too many others to name. Above all else, Cliff is remembered as a faithful and Godly man. He was faithful to God and devoted to his family. He served as deacon, trustee, choir member, volunteer on construction projects, and a bold witness for Christ. He dearly loved his family and provided well for Betty and his girls. Staying connected to family was a major priority for him. He provided a wonderful legacy for his entire family, including his four daughters and spouses, six grandchildren and spouses, seven great grandchildren, and his nieces and nephews. He gave God credit for the successes he found in life as he would often say, “I have been so blessed.” Cliff was preceded in death by his brothers, Lloyd and Larry, his daughter Diane, and infant grandson, Robert. Cliff is survived by his bride of 69 years, Betty; daughters Yvonne (Sal) Arnaldo of Tallahassee, FL; Karen (Mike) Belk of Jacksonville, FL; Nancy (Rob) Linebarger of Alligator Point, FL; son-in-law Ben Gatlin of Laurel, MS; grandchildren: Paul (Laurie) Arnaldo and children Jacob and Emma of Tallahassee; Gina (Andre’) Cantrell and children Layla, Claire, and Langston of Houston, TX; Peter Belk of Tampa, FL; Andrew (Hope) Belk and children Bradley and Daniel of Jacksonville, FL; Joshua (Molly) Belk of Nashville, TN; Dustin (Beth) Harmon of Harrison, TN. The family will receive friends from 10:00 a.m. until 10:30 a.m. Monday, April 11, 2022 at Bevis Funeral Home, funeral services will follow in the chapel at 10:30 a.m. The service will be available to view live online at https://www.bevisfh.com. To watch, click on the word Obituaries at the top of the homepage, then click on the name of your loved one, and then the green Photos and Videos tab. Staff members will be available to answer questions or help with technical issues at (850) 385-2193. Graveside services will follow at 1:00 p.m. at Tallahassee National Cemetery. In lieu of flowers memorial contributions may be made to the charity of your choice. Susie Mozolic of Bevis Funeral Home is assisting the Todd family with their arrangements. (www.bevisfh.com 850-385-2193)

Clifford Laverne Todd, 90, entered into the presence of his Lord and Savior, Jesus Christ, on April 5, 2022. Cliff was the second of three sons born to H. Lloyd, Sr. and Molly Todd in Monterey, Tennessee. The family moved to Miami, Florida,... View Obituary & Service Information

The family of Clifford Laverne Todd created this Life Tributes page to make it easy to share your memories.

Clifford Laverne Todd, 90, entered into the presence of his Lord...

Send flowers to the Todd family.