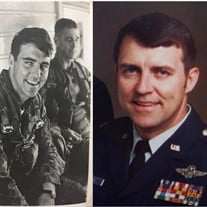 Clyde Ferrell departed this earth Jan 6, 2022, in Lubbock, Texas. Clyde Thomas Ferrell, was born on April 30,1945 in Tallahassee, Florida to Lottie Kauffman and Alexander Ferrell (Alex). There might have been almost 10 years between him and his nearest sibling, but he was very much beloved. Clyde (Tom) attended Kate Sullivan Elementary School, Cobb Jr. High, Leon High School, and Florida State University. He graduated in 1967 with a Bachelor of Science degree in Biology. He was a member of the Air Force ROTC which led to a 20 year military career. During his time in the service, he was classified as navigator/weapon systems officer in the F4 Phantom (6+ years). He later served as a navigator operations officer for almost 9 years and an operations management officer for about 2 years. He was a veteran of the Vietnam War where he was awarded the Distinguished Flying Cross, an air medal with 14 devices, a commendation medal, and other honors relating to his combat tours. Tom was stationed at various bases including Davis Monathan, MacDill, Ubon -Thailand, Elmendorf, Zweibrucken in Germany, Eglin, Moody, and Reese. Tom met and married Beverley D. Smith, on December 13, 1969, in Plankinton, South Dakota. A son, Shannon Ferrell, was born at Elmendorf AFB in Anchorage, AK in 1971. Upon his retirement from the Air Force after 20 years, he went back to school and received another BSc degree as a computer software engineer. He worked writing code for Fireman’s Fund Insurance before it merged with Allianz. Although he didn’t have many places or time to fish in west Texas, he enjoyed fishing and was always looking for a place to land a fish. He made many trips back to Tallahassee to visit his beloved family and oversee business affairs with occasional trips to Orlando to visit his granddaughter Harmony during winter vacation. He was preceded in death by parents, Lottie and Alex Ferrell, siblings Leroy, Mary (spouse Jim Jordan), Gladys (spouse Gene Billings), sister-in-law Catherine (spouse Carl Ferrell), and Mr. Edgar J Smith (father-in-law). He is survived by his wife Dr. Beverley Smith Ferrell, his son, Dr. Shannon Ferrell and spouse, Dr. Marion Desmarchelier, granddaughter, Harmony Y. Ferrell, and brother, Carl E. Ferrell Sr., sister-in-law, Doris Ferrell, and mother-in-law, Frances Smith, along with many nieces, nephews, and cousins. In Lieu of flowers and memorial gifts, please make donations to local foodbanks in your area, the DAV (Disabled American Veterans), the Salvation Army or food delivery services for the elderly such as Meals on Wheel. Clyde and Beverley regularly sponsored these organizations, and the family feels donations to these groups continues to honor his memory. Funeral services will be held at 11:00 AM, Thursday, January 13, 2022 at Bevis Funeral Home Chapel, interment with Military Honors will be at 1:00 PM at Tallahassee National Cemetery, Tallahassee, Florida. Todd Wahlquist with Bevis Funeral Home (850-385-2193, www.bevisfh.com) is assisting the Ferrell with their arrangements.

Clyde Ferrell departed this earth Jan 6, 2022, in Lubbock, Texas. Clyde Thomas Ferrell, was born on April 30,1945 in Tallahassee, Florida to Lottie Kauffman and Alexander Ferrell (Alex). There might have been almost 10 years between him and... View Obituary & Service Information

The family of Clyde Thomas Ferrell created this Life Tributes page to make it easy to share your memories.

Send flowers to the Ferrell family.