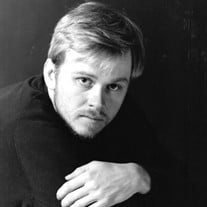 David Christopher Olsen, 55, took his own life on August 29th, 2021. He was born on February 25th, 1966, in New York City, the first born and only son of Charles Monroe Olsen and Rosalyn Margaret (Newport) Olsen. David was preceded in death by his father, Charles. David is survived by his mother, Rosalyn (Newport) Olsen, his sister, Kristin Elizabeth Olsen, his daughter, Jaime Aerwyn Olsen, and his widow Judy Ann (Nock) Olsen to whom he was married for 23 years. David attended Stuyvesant High School in New York City and was a graduate of Florida High in Tallahassee and The Florida State University with a Bachelor of Arts degree in Theatre. David was a third-generation theater professional, having enjoyed numerous personal and professional successes in his life including but not limited to stage and screen. An adept carpenter and a welder, David was also known for his technical theater skills and worked for many Off-Broadway houses including the New York Shakespeare Festival where he was one of two resident welders. He was the artistic director of the Ergonomic Theater Company and took on the roles of producer, director, set designer, and star of his vision of Hamlet in a way that only he could do. He appeared as a co-star in an episode of the popular television show "In the Heat of the Night" and others including "Orange is the New Black" and the movie "The Basketball Diaries." Some of his best stage performances were in Atlanta, Georgia where he captivated audiences with his portrayals of leading roles in "Oedipus" and "West" which got rave reviews and attracted fans. Music was a central part of David's life. He was a guitar player and a songwriter and will always be remembered for his hit songs including "Mary MacDougal" and "Follow Folly Far" which he would play with his friend and songwriting partner Merald Clark to the delight of their companions in the Society for Creative Anachronism where he was known as Daenn Oakenfist, a name that referenced his fighting ability. David was a skilled sailor and enjoyed navigating his Irwin sloop around the New York waterways. He lived in Tallahassee for many years, having first moved there at the age of fifteen, then returned to New York where he lived with his wife and darling daughter until he returned to Tallahassee where he spent his final years. David worked as a taxicab driver in New York City. He was also a Local 40 structural ironworker and made significant repairs to the Manhattan Bridge. A world traveler, David made several trips abroad and had a wide appreciation for culture in many forms from decorative arts to cuisine. Cremation has taken place and a memorial gathering will be held online and in person on Tuesday September 28th at 6:00 PM. EST at TheaterLab located at 357 W 36th St, 3rd floor, New York, NY. The gathering will be live-streamed on the internet for those who wish to attend virtually. Proof of vaccination is required for all who wish to attend in-person. Please join us for the virtual memorial service honoring David Olsen on Tuesday September 28th 6:00 PM EST: Google Meet joining info: https://meet.google.com/poy-ovwd-mwp If you have any difficulties please email [email protected] David’s final interment will be at Rose Hill Memorial Park King David Memorial Garden at 100 Mill St, Putnam Valley, New York at a later date. In lieu of flowers, those who wish to honor David may make a donation to the college fund of his beloved daughter Jaime in the following ways: Google Pay: https://gpay.app.goo.gl/pay-pYroaWcKQDg PayPal: PayPal.me/jaimeolsencollege Venmo: @Jaime-Olsen-College-Fund Cash app: $JaimeOlsenCollege If you or someone you know is contemplating suicide, please call the National Suicide Prevention Lifeline 800-273-8255 Susie Mozolic of Bevis Funeral Home is assisting the family with their arrangements. (www.bevisfh.com 850-3852193)

David Christopher Olsen, 55, took his own life on August 29th, 2021. He was born on February 25th, 1966, in New York City, the first born and only son of Charles Monroe Olsen and Rosalyn Margaret (Newport) Olsen. David was preceded in death... View Obituary & Service Information

The family of David Christopher Olsen created this Life Tributes page to make it easy to share your memories.