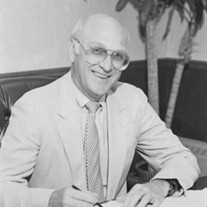 David Lynn Swafford, age 83, passed away peacefully after a long battle with Parkinson's Disease on December 6, 2021 in Tallahassee, Florida. The youngest of three, David was born January 20, 1938 in Cleveland, Tennessee to Cleetes Greeley Swafford and Mary Lyde Ramsey Swafford. A graduate of Bradley County High School in Cleveland, Tennessee where he was known as “Cotton”, David was a three-sport athlete and was inducted into the Bradley High “Old Timers Club” Hall of Fame in 2006. He received his Bachelor’s degree from the University of Tennessee and was a member of Alpha Tau Omega Fraternity. After graduation and spending one year as a high school math teacher, David accepted a position as a Regulatory Analyst with the Public Service Commission (PSC) in 1962 and moved to Tallahassee. He became Executive Director of the PSC in 1978 at the age of 39 and served in that capacity for 15 years, retiring from the PSC in 1992. David was a lifelong member at First Baptist Church where he taught 8th grade Sunday school for many years. An avid golfer with a long, fluid backswing, David could often be found at Capital City Country Club in retirement, both playing golf or walking his beloved dogs Lilly and Trip. Survivors include his loving wife of 39 years, Jean Bettis Swafford; children Cleetes Ramsey Swafford, Alva Elizabeth Swafford Striplin (George Smith), and James Hudson Swafford (Katherine Brandon Swafford). He also leaves behind 8 grandchildren and a host of extended family members and close friends. David is preceded in death by his parents, as well as his siblings, James Swafford and Betty Swafford. The family will be receiving guests for a visitation in the Welcome Center at First Baptist Church of Tallahassee on Monday, December 13, 2021 at 10:00 a.m. with a service to follow in the sanctuary at 11:00 a.m. Interment will be held at Oakland Cemetery immediately following. In lieu of flowers and in great appreciation for the love and care received in his final days, memorial contributions may be made to Big Bend Hospice (1723 Mahan Center Blvd, Tallahassee, FL 32308) or to a charity of choice. Breanna Green of Bevis Funeral Home is assisting the family with their arrangements. (850-385-2193 or www.bevisfh.com)

The family of David L. Swafford created this Life Tributes page to make it easy to share your memories.

David Lynn Swafford, age 83, passed away peacefully after a long...

Send flowers to the Swafford family.