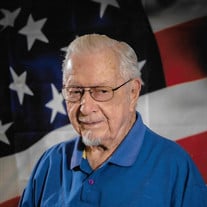 Donald Jay Gunderson, Sr., 99, passed away on July 13, 2021 in Tallahassee, Florida where he has called home for nearly 20 years. He was born on June 26, 1922 in Rock Rapids, Iowa to parents Arthur and Nettie Gunderson. Upon graduating from Crane Technical High School, Donald began working for the Chicago Rawhide Company as a foreman. He soon married his sweetheart, Jacqueline Cecelia Beecher, before answering the call to serve during WWII. He joined the United States Army and honorably served in the 409th Regiment of the 103rd Infantry Division specializing as a mortar gunner. Donald fought valiantly in the Rhineland and Central Europe campaigns. At the conclusion of WWII, Donald returned to the Chicago Rawhide Company where he would continue to work for over 30 years. Donald and his family later moved from Illinois to Florida. During this time, they moved around the Pinellas County area making a living by investing and rehabilitating properties for resale. Donald and Jacqueline also owned and operated Bay Arms Motel of Clearwater for 21 years before retiring and moving to Tallahassee in 2002. Donald was always extremely proud of his family’s accomplishments. He was an American Legion member for over 50 years with memberships at both Post 7 (Clearwater) and Post 13 (Tallahassee). He also maintained an active membership with the Republican National Committee’s Presidential Advisory Board. While living in Tallahassee, Donald attended both Blessed Sacrament Catholic Church and Good Shepherd Catholic Church. He will be remembered by many for his steadfast devotion to his family and his country alike. Survivors include his children, Barbara Gunderson Grady (Peter Grady, Sr.) and James Gunderson; grandchildren Peter Jr., Michelle, Christine, Diana, and James Jr.; great-grandchildren Kaitlin, Axel, Faith, Ashlee, Madeline, Payton, Gabriel, Jacob, Bella, and Logan as well as many other family members and friends who will miss him deeply. Donald is now reunited with his loving wife of 70 years, Jacqueline Cecelia Beecher Gunderson and his son, Donald J. Gunderson, Jr. who both preceded him in 2012. A memorial service will be held at Good Shepherd Catholic Church of Tallahassee on Monday, July 26, 2021 at 3:30 PM. In lieu of flowers, memorial contributions in his name may be made to Big Bend Hospice Foundation, Valor Program: 1723 Mahan Center Blvd. Tallahassee, FL 32308. Donald will later be interred in his family’s plot at Queen of Heaven Cemetery in Hillside, Illinois. Breanna Green of Bevis Funeral Home is assisting the family with their arrangements. (850-385-2193 or www.bevisfh.com)

Donald Jay Gunderson, Sr., 99, passed away on July 13, 2021 in Tallahassee, Florida where he has called home for nearly 20 years. He was born on June 26, 1922 in Rock Rapids, Iowa to parents Arthur and Nettie Gunderson. Upon graduating from... View Obituary & Service Information

The family of Donald J. Gunderson, Sr. created this Life Tributes page to make it easy to share your memories.

Send flowers to the Gunderson, family.