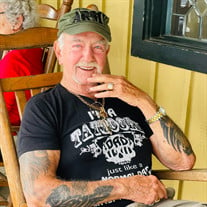 Donivan William Henry, age 84, passed away Tuesday, January 18th, 2022 at his residence. He was born December 18, 1937 in Xenia, Ohio to Donivan and Bonnie (Matthews) Henry. Donivan had a full life. He had a career in the army retiring after 20 plus years as a staff Sargent. He completed 2 tours in the Vietnam war and was awarded the bronze star. Following his second tour, he was stationed in Heidelberg Germany, in charge of the train and staff used by the General for transportation. He was then transferred to Ft. Rucker Alabama, where he served as staff Sargent to a platoon and trained recruits in fixed wing aircraft maintenance, following which he retired from service. While in the service he got his bachelors from Troy State University in criminology. Upon his retirement from the Army he and his family moved to Tallahassee, Florida. He took on a career in public safety in the city of Quincy in Gadsden County. At the time, it was a combined department, so he served as both a police officer and fire fighter. Years later when the departments separated, he stayed with the fire side and became the fire inspector for the department and ran the police and fire explorer programs. Later he went back to police work and then retired from Quincy. Donivan was also a part time instructor at the Pat Thomas law enforcement academy. He had multiple certifications in gun-smithing, and part time small jewelry repair at a pawnshop in Quincy. He was also at one time a private investigator. He continued to teach at the police academy until age 78. He continued to ride motorcycles and fly as he had his pilot license as well until age 83. He enjoyed doing cowboy action shooting, flying and riding motorcycles, he was a Mason and a member of the Oddfellows. He is preceded in death by his mother and father, his wife Diane (Bass) Henry, brothers Buddy Henry, Dale Henry, Wallace Henry, Patrick Henry and one son Robbie Henry. He is survived by one sister Dawn Eifler and one brother Michael Henry. His two daughters, Barbara Whiddon, and Mary Henry, one son, Thomas Henry. Four grand children, Donivan Henry, Darcy Henry, Danielle Henry, and Bowden Henry. And 8 great grandchildren, as well as two sisters-in-laws, Joy Henry and Tammy Henry and one son-in-law, John Whiddon. The family will receive friends, Wednesday, January 26, 2022 from 4:00 - 6:00 PM at Bevis Funeral Home. A graveside service will be held at 11:00 AM, Thursday, January 27, 2022 at Tallahassee National Cemetery, Tallahassee, Florida where military honors will be rendered. Todd Wahlquist with Bevis Funeral Home (850-385-2193, www.bevisfh.com) is assisting the Henry family with their arrangements.

Donivan William Henry, age 84, passed away Tuesday, January 18th, 2022 at his residence. He was born December 18, 1937 in Xenia, Ohio to Donivan and Bonnie (Matthews) Henry. Donivan had a full life. He had a career in the army retiring after... View Obituary & Service Information

The family of Donivan William Henry created this Life Tributes page to make it easy to share your memories.

Send flowers to the Henry family.