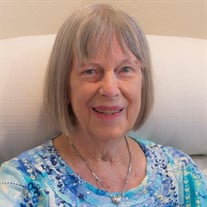 Doris Marie Scott Stauffer, 90, of Tallahassee, FL passed away on September 4, 2021. She was born in Wetaskiwin, Alberta, Canada to Janet and Robert Scott on March 5, 1931. Doris grew up in Ontario, Canada and worked as a General Motors accountant for 14 years. In 1961 she moved to Ocala, FL and in 1962 married the love of her life, Aubrey Millard Stauffer, of Walkerton, Ontario. They later moved to Gainesville, FL where she worked for 27 years in the Finance & Accounting Department at the University of Florida until she retired. In 1998 she moved to Tallahassee, FL to be closer to her daughter and family. Doris was a kind, sweet and gentle lady who was loved by all of her family and friends. She enjoyed all crafts but especially sewing, china painting, flower arranging and gardening. She was a member of Faith Presbyterian Church, sang in the choir and was a member of the Women’s ministry for many years. She was also a member of the Tallahassee Garden Club. She was a resident of Westminster Oaks for over 5 years and won over the hearts of her caregivers. Doris is preceded in death by her husband Aubrey Stauffer in 1987, brother Gordon Scott, and sisters Betty Kunkel and June Brill. Doris is survived by her daughter Jana Pennekamp (Tom) Tallahassee, FL, two grandchildren, Aubrie Leigh Eagerton (Stephen) Tallahassee, FL and Parker Pennekamp, Tallahassee, FL. Also by her step-son, Gary Stauffer (Kathy) Lethbridge, Alberta, and three step-grandchildren, Ryan Stauffer (Leila) Bloomsburg, PA, Michelle Melton (Mike Mullaly) Okotoks, Alberta and Kimberly Shelley (Paul) Edmonton, Alberta. She is also survived by great-grandchildren Jaden & Jude Melton, Mason Stauffer and Bennett Shelley as well as many beloved nieces and nephews in Canada. A private service will be held in the summer of 2022 in Walkerton, Ontario, Canada. Kelly Barber of Bevis Funeral Home (850-385-2193 or www.bevisfh.com) is assisting the family with their arrangements.

Doris Marie Scott Stauffer, 90, of Tallahassee, FL passed away on September 4, 2021. She was born in Wetaskiwin, Alberta, Canada to Janet and Robert Scott on March 5, 1931. Doris grew up in Ontario, Canada and worked as a General Motors accountant... View Obituary & Service Information

The family of Doris Marie Scott Stauffer created this Life Tributes page to make it easy to share your memories.

Send flowers to the Stauffer family.