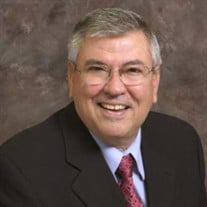 Douglas Charles Smith, a fourth-generation Tallahassee native, died peacefully at home on January 29, 2021, surrounded by his family. He was 76 years old. Doug graduated from Leon High School in 1962, rowed on the crew team at Jacksonville University, and later attended Florida State University. Doug was a Golden Chief and longtime Seminole Booster. He served in the US Army Reserves for six years, during and after college. For over 40 years, Doug was professionally dedicated to Ajax Building Company, a construction company founded in 1958 by his father, John Bloxham “Block” Smith Jr. At Ajax, Doug acted as the Company’s President for 15 years, as well as Chairman of the Board for 10 years. Under his leadership, Ajax grew exponentially -- from a local to multi-state business covering a mix of ground-up and renovation construction projects for a diverse range of sectors including education, government, healthcare, and historic restoration. During this time of rapid expansion, Doug was particularly proud of maintaining the Company’s core values and culture as a proud family-business. He continued to advance the Company in retirement -- supporting Ajax employees, attending annual corporate meetings, and visiting job sites. Active in the community, Doug was a member of the Tallahassee Chamber of Commerce, Associated Builders and Contractors (where he was President), First Union Board of Directors, the Colonels, Committee of 99, Elks Club, Town Club, and Springtime Tallahassee. While in Springtime Tallahassee, Doug took on the positions of “Spanish Krewe Chief” and “Andrew Jackson XIII.” With his signature zest for life, Doug loved planning trips abroad, as well as hosting friends and family in the mountains of Banner Elk, NC and at St. Teresa Beach. He was passionate about cooking, fishing, woodworking, and caring for rescue dogs. Doug leaves his wife of 55 years Karen Williams Smith, his son John Bloxham “Jay” Smith II (Bri), grandchildren Avery Smith, Ty Smith, Kate Smith, and Claire Smith, a brother Robert L. Smith (Suzanne), sisters and brother-in-law Kathy and Chris Doolin, Cris Speer, Tina Williams, and Pam Brame, and numerous cousins, nieces and nephews. He was predeceased by his son Kevin W. Smith and parents Block Smith and Irene Smith. The memorial service will be at 2 p.m. EDT Tuesday at Good Shepherd Catholic Church of Tallahassee and livestreamed at https://goodshepherdparish.org/livestream . Memorial contributions may be made to Big Bend Hospice, 1723 Mahan Center Blvd., Tallahassee, FL 32308. Rocky Bevis and Kelly Barber of Bevis Funeral Home (850-385-2193 or www.bevisfh.com) are assisting the Smith family with their arrangements.

Douglas Charles Smith, a fourth-generation Tallahassee native, died peacefully at home on January 29, 2021, surrounded by his family. He was 76 years old. Doug graduated from Leon High School in 1962, rowed on the crew team at Jacksonville... View Obituary & Service Information

The family of Douglas Charles Smith created this Life Tributes page to make it easy to share your memories.

Send flowers to the Smith family.