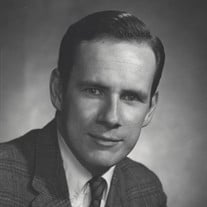 Edward Augustine Desloge, 94, died peacefully at his home in Tallahassee, Florida surrounded by family and friends on November 16, 2020. Edward was born on August 31, 1926 in St. Louis, Missouri and was the fifth of seven children born to Angela Burdeau and Louis Francis Desloge. He was raised in St. Louis and had very fond memories of his time growing up there. Ed attended Barat Hall and St. Louis University High School. Upon graduation from high school, he enlisted in the Navy as part of the V-12 program during World War II and attended the University of Notre Dame, where he ran on the track team. He was commissioned as a Naval officer and served on the USS Montpelier briefly before the war ended. Ed completed his studies in electrical engineering at Notre Dame and returned to St. Louis and enrolled at St. Louis University, where he earned a Masters and Doctorate in Physics. While he was in graduate school, he entered the Jesuit seminary. Ed stayed in the seminary for nine years but eventually decided that teaching Physics was to be his life’s work. He credits his time in the Jesuits for many life changing experiences that enriched his life greatly and made him a much better person. After leaving the Jesuits, Ed began teaching Physics at Yale University in New Haven, Connecticut. While there, he met Moira Dunne in Manhattan in early 1958 through his sister Julie, who was a good friend of Moira’s. They were married on December 15, 1958 and enjoyed a long and happy marriage. Ed was offered a position at Florida State University in the Physics Department starting in the Fall of 1959, and Ed and Moira were thrilled for the opportunity and adventure of heading south to Tallahassee. Ed loved his time as a Physics professor at Florida State University. He enjoyed his many wonderful colleagues, but his biggest joy were his interactions with his students. While at FSU, he published four graduate Physics textbooks. Ed was a diehard Seminole, who closely followed not only the football team, but also the men’s and women’s basketball teams and the softball and soccer teams. He was also an avid runner and competed in many long distance events, including an ultra-marathon. After Ed retired from Florida State, Moira told him he needed to “keep busy” and he became involved with Habitat for Humanity. He loved his time at Habitat and worked there until he was 90 years old, helping build many houses in Tallahassee. Known to everyone as “Mr. Ed”, he was famous for his truck full of tools, his talent at trim carpentry and his willingness and patience working with the “Saturday crowd." Ed was a wonderful husband and father and spent much of his free time with his family. Ed and Moira complimented each other very well, had a lot of fun together and had a real love and affection for each other always. He was a loving and supportive father who encouraged his children and grandchildren endlessly. Known as “PawPaw” to his grandchildren, he delighted in time with all of them. He was equally delighted with his children’s spouses and grew quite close to all of them over the years. Ed had a wonderful outlook on life, a wry wit and was always there to lend his ear, mentor and offer sage advice to his family, as well as to many other people in his life. He was an incredibly honorable, generous, kind and humble man, who set a wonderful example to all who knew him. His Catholic faith was very important to him and he was a longtime parishioner at Blessed Sacrament Catholic Church. He not only practiced his faith, but lived it daily. He is survived by his wife of 62 years Moira; his children Bryan, Matthew (Anne), Rosemary (Sean Wassem), Angela (Marty Sipple) and Bruce (Hyde); his daughter-in-law Beth Moor Desloge; his grandchildren, Elizabeth Ellis (Adam), Lina Desloge, Marcella Desloge, Patrick Desloge, Alice Desloge, George Desloge, Helen Desloge, Moira Wassem, Matthew Wassem, Kathleen Wassem, Bennett Sipple, Madeline Sipple, Caroline Sipple, Charlie Sipple, Morgan Desloge, Frannie Desloge and Edward Desloge II. Competitive to the end, he was the last living of his six siblings and we know he is looking forward to seeing Kiki, Betty, Buddy, George, Julie and David all again, as well as his parents. A Funeral Mass will be celebrated on Saturday, November 21, 2020 at 11:30 a.m. at Blessed Sacrament Catholic Church, Tallahassee, Florida. Interment in the Blessed Sacrament Columbarium will follow the Mass. A livestream of the Mass will be available at the Blessed Sacrament Catholic Church website: https://bsctlh.com/. Go to the purple banner on the homepage that says “MASS LIVE STREAM.” In lieu of flowers, donations can be made to Big Bend Hospice (1723 Mahan Center Blvd, Tallahassee, FL 32308): https://bigbendhospice.org/foundation or Open Door Women's Clinic (2410 Mahan Dr Unit 1, Tallahassee, FL 32308): https://www.donateodwc.com. Breanna Green of Bevis Funeral Home is assisting the family with their arrangements. (850-385-2193 or www.bevisfh.com)

Edward Augustine Desloge, 94, died peacefully at his home in Tallahassee, Florida surrounded by family and friends on November 16, 2020. Edward was born on August 31, 1926 in St. Louis, Missouri and was the fifth of seven children born to Angela... View Obituary & Service Information

The family of Dr. Edward A. Desloge created this Life Tributes page to make it easy to share your memories.

Edward Augustine Desloge, 94, died peacefully at his home in...

Send flowers to the Desloge family.