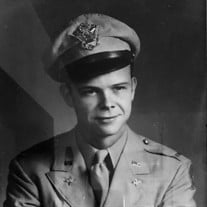 At age 99, Edward "Ed" announced to his family in February 2021 that he was going away and wanted to say goodbye. When asked where he was going, he said "Heaven"! When asked how he knew, he said "I just know". When asked when he was leaving, he answered "today". Five months later, on Friday, July 9, 2021, two months short of his 100th birthday, Edward, "Ed" did indeed say goodbye and passed gloriously into heaven to meet his Lord and Savior and reunite with Justine, his wife of 75 years, and family members that have gone before. He was a Christian who gave his heart to Jesus at an early age and attended First Baptist Church, Tallahassee for many years. Edward was born in 1921 in St. Petersburg, Florida, and moved to College Park, Florida at a young age. Growing up in the 1920s and '30s, he rode his horse "Lady" on the golf course at Dubsdred and swam in the many lakes around Orlando. In 1943 at the age of 22, Ed joined the United States Army Air Force. He married his sweetheart, Justine Rebecca Bell of Orlando in Childress, Texas two weeks before leaving for Italy to serve his country in WW II. He served as a bombardier in an 817 aircraft flying 35 missions over Germany from the base in Foggia, Italy. After the war, Ed attended the University of Florida graduating with a degree in Architecture in 1950. Following his graduation, Ed worked for an architectural firm in Winter Park. He designed many of the award-winning "mid-century modern" homes found in the Orlando area. In 1957, Ed moved his family to Tallahassee, Florida where he continued his architecture career and raised three children. Ed and a team of architects designed and built a hospital in the former Republic of Congo in the 1960's. Following retirement from the State of Florida Division of Medical Facilities, Ed and his wife Justine traveled the world. Ed also enjoyed gardening, golf, and exercising. He maintained beautiful flower gardens, played in golf tournaments, and walked 3 miles a day well into his 90's. Ed is predeceased by his mother and father, Edna and William Lee Meadows (College Park) his wife Justine (Tallahassee), sisters Dot Cole and Bea Dykes. He is survived by his three children Lee (Tallahassee), Cindy, (Seagrove Beach), Jon (Lisa) Orlando, granddaughters Delane (Massachusetts), and Bailey (New York), niece Jane Cole (Virginia), nephews Victor Cole (Nevada) and Danny Cruze of Orlando, and numerous cousins and many friends. Services, with military honors will be held at the Tallahassee National Cemetery, 5015 Apalachee Parkway on Friday, July 23 at 11:00 a.m. A reception will be held Thursday, July 22, 5:00-7:00 p.m. at Bevis Funeral Home of Tallahassee, 200 John Knox Road. In lieu of flowers, the family requests donations to Wounded Warriors Project (woundedwariorsproject.org) in memory of Lt. Colonel Edward Meadows, Sr. USAF (Ret.)