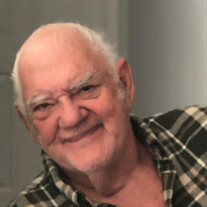 Edward LeVerne Rouse, followed his beloved wife to be with our Lord, February 25, 2021, with family by his bedside, in Crawfordville, Florida. >> He was born November 4, 1938. He is preceded in death by his parents Robert L & Ruby (Readdy) Rouse, his loving wife Dorothy (Smith) Rouse and a step-brother, Robert “Bob” Rouse. >> Ed was of Baptist faith and walked the path of a righteous man. He graduated high school, skipping the 11th grade due to academic advancements, from Richmond Academy, Augusta, Ga in 1954 at the early age of 16. He served as an M.P. in the US Air Force from 1958-1962, stationed in Orlando, Florida and was on the Augusta Police force from 1962-1966. He met and fell in love with his devoted wife, Dorothy, in 1977. > >> Ed was a carpenter and general contractor for 30 yrs. After retiring in 1997 following a near fatal auto accident, he continued to work with wood in his backyard shop, displaying his Arts and Crafts at local & regional shows thru November 2020. At the age of 82 he was still teaching the wood craftsmanship trade to his grandchildren. > >> He was known by all as “Papa” and was a devoted husband of 45 years, a hands on father, grandfather and great grandfather. He was a comedian at heart leaving no chance for a missed opportunity to turn any situation into a deep belly laugh. The children would all gather at his feet and hang on every word of his tall tales and raised eyebrow. His canning ability to make one feel at ease in his presence was unmatched. >> His interests included family dinners, arts n crafts, watching the “news” and making everyone laugh. >> Mr. Rouse is survived by his daughter Sheila (Louis “Top”) Erwin of Crawfordville, Florida, stepdaughter, Debra Cape and stepson Jimmy Duvall Jr of S.C., grandchildren, Angela (Danny )Vega, Jason (Jessica) Weatherly, J.R. (Kellie) Blue, Sara (Daniel) Shadrick, Audrey (Michael) Erwin, Bradley Erwin, all of FL. Grandchildren MaryAnne Cape, Frankie (Merritt) McNair, Heather (Justin) Pritchet, Ashley (Brian) Chastain, Bobby-Anne Duvall, Sean Duvall, eleven (11) great grandchildren, and a host of nieces and nephews. He is also survived by his loving sisters-in law Faye (Sonny) Hodges, Sue Slater Stafford and Bobbie (W.H.) Teague all of GA. as well as a bonus brother-in law Madison “Bubba” (Bonnie) Smith of Florida. >> Mr. Rouse was also preceded in death by three sons Mack Rouse, Willie Duvall, and Bobby Duvall, sister-in law & brother in-law, Claudia “Bea” (Francs “Fritz” ) Nitz. >> A memorial service is planned for March 5, 2021, Friday at 11:00am at Lake Ellen Baptist Church in Crawfordville, FL., service officiated by Sr Pastor Keith Wallace >> Should one wish, In lieu of flowers, the family is requesting donations sent to American Cancer Society in memory of Edward L. Rouse. David Conn and Kimberly Crum with Bevis Funeral Home of Crawfordville are assisting the family with arrangements. (850-926-3333, www.bevisfh.com)

Edward LeVerne Rouse, followed his beloved wife to be with our Lord, February 25, 2021, with family by his bedside, in Crawfordville, Florida. >> He was born November 4, 1938. He is preceded in death by his parents Robert L & Ruby (Readdy)... View Obituary & Service Information

The family of Edward Le Verne Rouse created this Life Tributes page to make it easy to share your memories.

Edward LeVerne Rouse, followed his beloved wife to be with our...

Send flowers to the Rouse family.