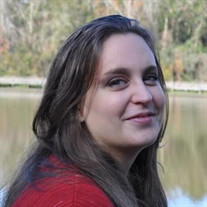 Elizabeth Ann (Johanson) Brackins was born December 16, 1990 in San Luis Obispo, California, the fifth of six children born to Kerry and Susan Johanson. In 2000 she moved with her family to Gainesville, Florida where she attended elementary,... View Obituary & Service Information

The family of Elizabeth Ann Brackins created this Life Tributes page to make it easy to share your memories.

Send flowers to the Brackins family.