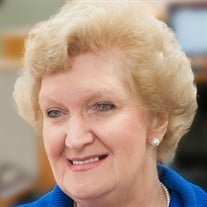 Elizabeth “Earline” Whitley, age 72, of Tallahassee, went to her eternal home on March 18, 2021. Earline was married to Gary E. Whitley and together they built a wonderful life around their beautiful daughters. Earline was the daughter of the late Charles E. and Elizabeth L. Boykin. Earline retired a few years ago from Florida State University, working a long career in the psychology department. However, what she is best known for is her gifted musical talent as a pianist. Throughout her life she has played for numerous churches and served as minister of music, but she was often called upon to play in large venues, camp meetings, assemblies and as a recording musician. She had an incredible ability to play at any level but was gifted by God to play on demand by ear. She is survived by her husband of 46 years, Gary E. Whitley and daughter Angela Whitley, of Tallahassee. In addition to her parents Earline was preceded in death by her daughter, Elizabeth Ruth (Libby) Whitley. She is also survived by her brothers Charles E. Boykin, Jr. (Kathy), Tallahassee, Bobby E. Boykin (D.J.), Mahomet, IL, and B. Dwayne Boykin (Sharilyn), Tavares, FL, as well as numerous nephews and nieces. The family will welcome friends from 10:00 AM until service time on Tuesday, March 23rd at Bevis Funeral Home, 200 John Knox Road in Tallahassee. Services will follow at 11:00 AM, at the funeral home. The concluding service will follow at 1:00 PM at Tallahassee National Cemetery. Rocky Bevis of Bevis Funeral Home (850/385-2193 or www.bevisfh.com) is assisting the family with their arrangements.

Elizabeth &#8220;Earline&#8221; Whitley, age 72, of Tallahassee, went to her eternal home on March 18, 2021. Earline was married to Gary E. Whitley and together they built a wonderful life around their beautiful daughters. Earline was the daughter... View Obituary & Service Information

The family of Elizabeth "Earline" Whitley created this Life Tributes page to make it easy to share your memories.

Send flowers to the Whitley family.