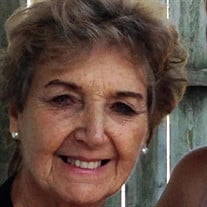 Esther Miriam Ann Ellis (Nee: Knight), wife, mother, sister, grandmother and friend to all, entered into the glory of paradise on Friday, August 13, 2021. As anyone who knew Esther will agree, Esther’s name was synonymous with love and kindness. A long- time member of St. Michael’s Episcopal Church in Racine, WI and currently a member of Christ Church Anglican in Crawfordville, FL, Esther was a true follower of Jesus Christ and her life was testimony that she lived her faith. Always putting others’ needs before her own, she volunteered and worked tirelessly for the aid of the community. Her work with Operation Santa, the Food Pantry and the pregnancy center were just a few of the volunteer programs she participated in, always offering a welcoming caring hand to anyone who needed it. Esther always saw the good in others. Esther’s love didn’t stop at helping people, she also had a big heart and love for animals and they seemed to sense she was a good soul and that they could trust her. Tuffy, Barney, Bootsie and Mama are evidence of that. Born on July 31, 1942 in London, England, Esther was raised in the United Kingdom and immigrated to the USA during the 1960’s.Even though she treasured her American citizenship, she had a never ending love for her British heritage and the British Isles and always referred to it as “home”. Esther’s working years were spent primarily in retail management and the healthcare field. She was successful in all she undertook. Esther is preceded in death by her parents, Esther and Victor Knight; her sister, Patricia Ann Lovell and many aunts and uncles. She is survived by her husband Mike Ellis; daughter, Tracey Rickell; son Mark and wife Jenny Rickell; sister Lynn Zobel; grandchildren Cindy, Mikey, Kannon and Kendal; and many cousins still located in the UK, New Zealand and Australia. Esther’s friends are too many to count. Deeply loved by many, Esther will be greatly missed. Her legacy of kindness and care for others will continue through the many, many lives she touched. In John’s Gospel 13:34, Jesus says, “ A new command I give you; Love one another. “ Esther spent her life doing her best to obey that command. A Celebration of Life service will be performed on September 9, 2021 at 11:00 AM at Christ Church Anglican in Crawfordville, FL and at a later date, the interment of her ashes will be performed at St. Michael’s Episcopal Church, Racine, WI. David Conn and Kimberly Crum with Bevis Funeral Home of Crawfordville are assisting the family with arrangements. (850-926-3333 www.bevisfh.com)

Esther Miriam Ann Ellis (Nee: Knight), wife, mother, sister, grandmother and friend to all, entered into the glory of paradise on Friday, August 13, 2021. As anyone who knew Esther will agree, Esther&#8217;s name was synonymous with love and... View Obituary & Service Information

The family of Esther Miriam Ann Ellis created this Life Tributes page to make it easy to share your memories.

Send flowers to the Ellis family.