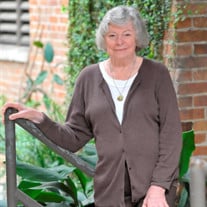 Eugenia “Jean” Louise Coyne, 87, a founding staff member of Big Bend Hospice, a big-hearted volunteer, and a loving wife, mother and grandmother, died Tuesday, Nov. 2, 2021, at her Tallahassee home. A private service for family will be held later this month. In lieu of flowers, memorial contributions may be made to the Florida-Colombia Partners of the Americas (https://fl-poa.org) or Big Bend Hospice (https://bigbendhospice.org/). Bevis Funeral Home, 200 John Knox Road (850-385-2193) is handling arrangements. Jean was born on Easter Sunday in Willard, Ohio, to Frederick Justus Oetzel and Mary Louise Houck Oetzel, and grew up in nearby Norwalk, where she attended St. Paul’s Catholic schools and graduated as valedictorian in 1951. After earning a nursing degree from St. John’s Hospital School of Nursing in Cleveland in 1954, she embarked on a career that took her to Norwalk Memorial Hospital and Ohio State University for work and education. After venturing to Miami for a position at St. Francis Hospital and classes at the University of Miami, Jean met Robert “Bob” Francis Coyne, who was studying English at the university. They married in 1956 and began raising two children, Sean and Kathleen, in south Florida. The family relocated in 1961 to Tallahassee, where Bob completed his Ph.D. and had a long career as an administrator at Florida State University. Jean managed their Waverly Hills home then, as the children grew older, studied medical anthropology at Florida State, where she earned a B.S. and, in 1983, an M.S. degree. Soon after, Jean was hired as the first patient care coordinator at the newly formed Big Bend Hospice. For 25 years she served in numerous roles there, including interim director and, after retiring, part-time staffer and volunteer. Hospice established the annual Jean Coyne Excellence in Nursing Award in 2004 in her honor. She was the first recipient. Avid travelers, Jean and Bob visited Alaska, New Zealand and many points in between. They voyaged extensively across Central and South America, in part for their volunteer work with the Florida-Colombia Partners of the Americas, a nonprofit group that encourages better inter-American relationships. After Bob was diagnosed with Parkinson’s disease, the couple stayed closer to home, where Jean cared for her husband. After Bob died in 2007, Jean continued her volunteer work for Hospice, Partners, Parkinson’s Foundation Florida and the Osher Lifelong Learning Institute (OLLI). An avid reader and lover of the arts and the natural world, she took many classes at OLLI and the Tallahassee Senior Center and was selected for the Tallahassee Active LifeLong Leaders (TALL) program, a community leadership program for people ages 50 and above. Jean was recognized for her volunteer contributions with awards from the United Partners for Human Services, the Parkinson’s Foundation Florida, and the Tallahassee Senior Citizens Foundation, which in 2014 named her a Silver Star, an honor bestowed on individuals who make a positive impact in the community after turning age 60. Over the years, Jean has been a loving dog-mom to a string of pets, some trained as pet therapy dogs. She is survived by her son, Sean Coyne (and wife Kristen Eliza) of Tallahassee; her daughter, Kathleen Russell (and husband Bruce) of High Springs; three grandchildren, Andrew Russell of High Springs, Renee Lancaster of Melbourne, Australia, and Omie Coyne of Tallahassee; niece Karen Burgos of Tallahassee; and other nieces and nephews. Kelly Barber of Bevis Funeral Home (850-385-2193 or www.bevisfh.com) is assisting the Coyne family with their arrangements.

The family of Eugenia "Jean" Louise Coyne created this Life Tributes page to make it easy to share your memories.

Send flowers to the Coyne family.