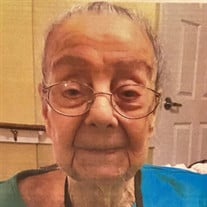 Evangeline Lata, age 102, passed away on December 26 at her Assisted Living Facility in Tallahassee. Evangeline, or Evelyn, was born to Luigi Lata and Cessira (Greco) Lata in Greenwich Village, New York City in 1918. She lived only a few blocks from her birthplace until she reached her mid-nineties. As a child, she enjoyed tormenting her brothers and, as a young adult during World War II, spent summers working for the Women’s Land Army on farms in Upstate New York. She graduated from Hunter College in 1939 with a degree in English and Education. Evelyn grew up speaking English, Italian, and Arbreshte, an Albanian dialect. Some of her earliest memories were of dodging boys playing stickball in the street while running errands for her mother as well as waving to tenants on the upper floors of the building her family owned on Morton Street in the Village. A hard-core New Yorker living in a fourth-floor walkup, she commuted to her job as a Legal Secretary for the Grievance Committee of the State of New York in Brooklyn until she neared her 80th birthday. She spent her retirement visiting friends and volunteering for Outreach activities at St. Francis Xavier Parish in Chelsea before moving to Tallahassee in 2012. She enjoyed playing games, listening to music, and was known for her outgoing personality and dry sense of humor. She was also devoted to family, seldom missing a birthday and helping support her grand-nephews’ education. “Aunt Evelyn” is survived by her nephews Paul (Madison, Wisconsin), Matthew (Tallahassee. Florida), Thomas (Columbia, Missouri), nieces Catherine (Anchorage, Alaska) and Mary (Flagstaff, Arizona) as well as six grand-nephews and one great-grand niece. She was preceded in death by her parents and brothers John and Gennaro (Gene). A Funeral Mass will be said at Blessed Sacrament Catholic Church in Tallahassee on Tuesday, December 29 with burial in the family plot at Calvary Cemetery in Queens, New York. Memorial donations may be made to Big Bend Hospice ( https://bigbendhospice.charityproud.org/Donate ). Kelly Barber of Bevis Funeral Home (850-385-2193 or www.bevisfh.com) is assisting the Lata family with their arrangements.

Evangeline Lata, age 102, passed away on December 26 at her Assisted Living Facility in Tallahassee. Evangeline, or Evelyn, was born to Luigi Lata and Cessira (Greco) Lata in Greenwich Village, New York City in 1918. She lived only a few blocks... View Obituary & Service Information

The family of Evangeline "Evelyn" Lata created this Life Tributes page to make it easy to share your memories.

Evangeline Lata, age 102, passed away on December 26 at her Assisted...

Send flowers to the Lata family.