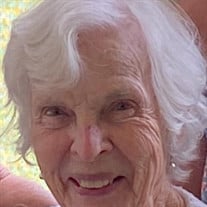 Evelyn K. Pullen, 93, of Tallahassee, died peacefully at home on Sept.28th, while surrounded by her loving family. She was born on Sept. 21, 1928, in Tampa, Fl. to Oscar and Lillian Kroenke. The family relocated to Tallahassee several years later, where Evelyn attended elementary and middle schools. She graduated from Leon High School in 1946, as Secretary of her senior class, and member of the Pierian Honor Society. While growing up in Tallahassee, Evelyn was next-door neighbors with Jim Pullen. At first just a family friend, Jim would later became her husband and the love of her life. Their marriage lasted 66 years, until Jim’s death in 2014. Evelyn always had a keen knack for numbers. She began her career with Leon County Schools as a bookkeeper at Sealey Elementary and Raa Middle Schools, eventually moving to the Leon district office, where she rose to Supervisor of Accounting, a position she held until her retirement. Evelyn was thoroughly devoted to her family, and many of her happiest times were sharing holidays, birthdays, and other special occasions with them. She doted on her husband, and lavished love and generosity on her three grandsons, who in her mind could do no wrong! She was also a constant, loving and attentive primary caretaker to her mother and her husband in their final years. Evelyn had a deep and abiding faith that was central in her life, as was the church she attended: she was a loyal member of First Baptist since the age of four! She served on the church’s finance committee for many years, later working in the church nursery during Sunday services, and also volunteering in the church library throughout her eighties. Although Evelyn lived her whole life in Tallahassee, she took great delight in traveling the world with Jim and other family members, especially her brother-in-law and sister-in-law, Bob and JoAnn Pullen. She greatly enjoyed cruises to Alaska, down the rivers of Europe, through the Panama Canal, along the Amazon River, and to every corner of the Caribbean, just to name a few. One of her all-time traveling highlights was a two week visit to the Holy Land, with a First Baptist Church group led by Dr. Doug Dortch. Evelyn loved to crochet and embroider, and was an excellent seamstress, sewing clothes for her daughters, as well as for their dolls. She was also an avid gardener, attending to every aspect of her yard, from mowing and weeding to landscaping. She also enjoyed creating floral arrangements to display around the house. Even in her last years, Evelyn remained active and engaged in her hobbies and interests. She took great pleasure in solving difficult jigsaw puzzles, reading library books voraciously, watching and identifying birds feeding in the yard, and pampering the family dog, Buddy, until just a few weeks before her passing. In addition to her parents and husband, Evelyn was pre-deceased by her brothers, William and Walter Kroenke, and sister Margaret Anderson. Survivors include daughters Karen Zaccardi (Tom), Lynn McGuire (Bill); grandchildren Christopher McGuire (Molli), Michael McGuire, and Tim Zaccardi; brothers -in-law Jack Pullen (Annette) and Bob Pullen (JoAnn) and sister-in-law Carol Ann Pullen Hutto; numerous nieces, nephews, great-nieces and great-nephews. A graveside service will be held at Oakland Cemetery, 838 N. Bronough St, Tallahassee, Fl. 32303, on Oct. 19, at 11:00 a.m. Due to precautions surrounding the Covid-19 pandemic, the family has requested that everyone wear a face covering, and maintain social distance. Susie Mozolic of Bevis Funeral Home is assisting the Pullen family with their arrangements. (www.bevisfh.com 850-385-2193)

Evelyn K. Pullen, 93, of Tallahassee, died peacefully at home on Sept.28th, while surrounded by her loving family. She was born on Sept. 21, 1928, in Tampa, Fl. to Oscar and Lillian Kroenke. The family relocated to Tallahassee several... View Obituary & Service Information

The family of Evelyn Kroenke Pullen created this Life Tributes page to make it easy to share your memories.

Send flowers to the Pullen family.