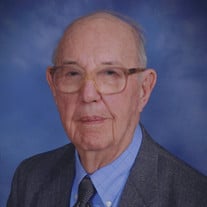 Ewell Thomas Denmark, Jr., “Tom”, died on November 2, 2021 in Tallahassee, Florida where he called home for over 60 years. He was born in Statesboro, Georgia as the only child of parents Annie Laurie Turner Denmark and Ewell Thomas Denmark, Sr. Tom attended Georgia Military Academy in College Park, Georgia during his formative years. He was an Eagle Scout and JROTC member. At only 17 years old, he demonstrated heroism when he resuscitated a 7-year-old drowning victim using skills learned from the American Red Cross. He completed his undergraduate at the University of Florida and was a member of Phi Delta Theta fraternity. Tom would continue to demonstrate bravery, quick wit, and compassion throughout his life. He served as First Lieutenant in the Army during the Korean War, where he was awarded the Bronze Star Medal. Tom obtained his Masters and PhD from Florida State University. He went on to become an esteemed educator and faculty member at the university. FSU awarded him with the status of an Emeritus Professor. There was no doubting his passion for education. He authored textbooks, hosted foreign exchange students in his home, and established the E.T. Denmark Scholarship at Chipola College, in Mariana, Florida for students seeking an education in mathematics. As an education enthusiast, he also lobbied for fellow mathematics and science educators in Washington D.C. Education and mathematics were not Tom’s only passions. He loved travel, visiting almost every continent throughout his lifetime. He was a patron of the Arts serving on the board of FSU’s University Musical Associates, lending support to Tallahassee’s Little Theatre and a patron of the Tallahassee Symphony Orchestra. Tom was a staunch supporter of the Salvation Army and Big Bend Hospice, where he often volunteered his time with patients. He was a president and long time member of the Rotary Club of Tallahassee and a member of Tallahassee Tiger Bay Club. He was a member of Trinity United Methodist Church since 1959. Tom is now reunited with his loving wife, Patsy Dowling Denmark, who preceded him in 2012. He is survived by his children Steve Denmark (Sabrina), Lauri Louwsma (Kevin), and Saundra Denmark (Sue Rassmussen); grandchildren Leila Denmark, Kendra Denmark, Stevie Denmark, Ben Louwsma, and Shannon Louwsma Keutzer (Nick), along with a host of cousins and extended family members. All will remember him fondly. The family will be receiving guests for a visitation at Bevis Funeral Home of Tallahassee on Monday, November 8, 2021 from 11:00 a.m. – 1:00 p.m. Following visitation a graveside service at Roselawn Cemetery will be held following the visitation at 1:30 p.m. In lieu of flowers, memorial contributions may be made to the E.T. Denmark Scholarship fund with checks payable to: Chipola College Foundation (3094 Indian Circle, Marianna, FL 32446) accompanied by a note that specifies the donation is for the E.T. Denmark Scholarship Endowment in his memory, or a gift may be made to Big Bend Hospice. Breanna Green of Bevis Funeral Home is assisting the family with their arrangements. (850-385-2193 or www.bevisfh.com)

Ewell Thomas Denmark, Jr., &#8220;Tom&#8221;, died on November 2, 2021 in Tallahassee, Florida where he called home for over 60 years. He was born in Statesboro, Georgia as the only child of parents Annie Laurie Turner Denmark and Ewell Thomas... View Obituary & Service Information

The family of Ewell "Tom" Denmark, Jr. created this Life Tributes page to make it easy to share your memories.

Send flowers to the Denmark, family.