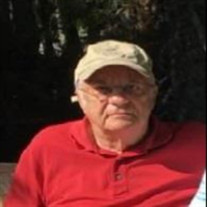 Fabian Aparisi passed away on December 12, 2020. He was born in 1938 in New York City, New York to Fabian and Theresa Aparisi. Raised in East Rutherford, New Jersey. He joined the Air Force after high school and was stationed in New Hampshire, Florida, Arkansas, California, Texas and the Philippines. He worked with flight simulators on B58s, SR71s and FB111s. It was at Clark Airforce base in the Philippines that he won second place in the chess competition. He loved chess and studied classic matches. His son, Jim, said he never saw him lose a game. He also built a telescope from scratch and a color TV from a Heathkit before they were commercially available After 21 years, in the early seventies, he retired from the US Air Force and moved to California where he completed his undergraduate degree at Cal State Hayward. He worked for Singer, Calma and GE. After California he moved to Florida where he met his wife. In recent years, he started two businesses with his partner Tommy Tullos. Tommy T’s Mighty Lube in Bainbridge, Georgia. With his sons he also started a security business. He went to Blessed Sacrament Catholic Church and was involved in the Adoration program. He is survived by his wife Sandra Stevens Aparisi; children Anna Marie (Charlie), Fabian Jr. (Toby), Christopher (Lisa), William (Jennifer), James (Peggy); 11 grandchildren and 6 great grandchildren and many other friends and family. All of whom loved him dearly. A service will be held at Blessed Sacrament Catholic Church in Tallahassee, 624 Miccosukee Rd, Tallahassee, FL 32308, on Friday, December 18 at 11 a.m. The service will be livestreamed at www.bsctlh.com and click on Livestream. It will be available at the time of the funeral mass and archived for viewing later. In lieu of flowers, please consider contributions to the Blessed Sacrament Catholic Church, 624 Miccosukee Rd, Tallahassee, FL 32308 Todd Wahlquist with Bevis Funeral Home (850-385-2193 or www.bevisfh.com) is assisting the Aparisi family with their arrangements.

Fabian Aparisi passed away on December 12, 2020. He was born in 1938 in New York City, New York to Fabian and Theresa Aparisi. Raised in East Rutherford, New Jersey. He joined the Air Force after high school and was stationed in New Hampshire,... View Obituary & Service Information

The family of Fabian Aparisi created this Life Tributes page to make it easy to share your memories.

Send flowers to the Aparisi family.