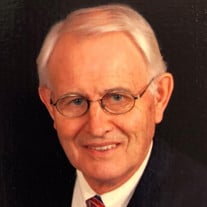 Fran Buhler, 80, a long-time resident of Tallahassee, passed away peacefully on February 9, 2021 at home. Born is Lebanon, Tennessee on July 17, 1940 to a Southern Baptist Preacher and homemaker, Allen and Amy Buhler, Fran grew up learning about life and ministry from his Dad. Early morning fishing adventures before school where the fish were given to those more in need helped shaped his awareness of and commitment to those less fortunate. From a young age, Fran developed a gentleness and strength that became the foundation for his life. He graduated from Lebanon High School in 1958 where he was an honor roll student, three-sport athlete, captain of the football team and student government president. Most important, he dated and fell in love with Nancy Lou - his Tennessee Sunshine. Fran graduated from Carson Newman College in 1962 with a History Degree. At Carson Newman, he was an all-conference quarterback, team captain and student body president. Fran attended Union Theological Seminary in Richmond, VA before transferring to Baptist Theological Seminary in Louisville KY and graduating with a Divinity Degree with emphasis in Psychology of Religion, Pastoral Care and Biblical Theology. In 1963, Fran married his middle and high school sweetheart – Nancy Lou – and recently celebrated 58 years together. Fran was known and loved by many for his kindness, generosity and humble spirit. He was an avid reader and writer and his gift of intentional listening and his heart of a comforter allowed him to share compassionate wisdom and encouragement to people from all walks of life. Fran was a passionate advocate for justice for all people and when asked by a doctor on a medical questionnaire in late 2020 what would be a good day – Fran responded, “for all discrimination to be abolished.” If you knew Fran, you certainly witnessed his knowledge of scripture and his love for sharing it through words, actions and the way he lived his life. Although Fran served in full time ministry for over two decades as the Associate Pastor/Director of Ministry at First Baptist Church Tallahassee, he was a ministry leader his entire life. His life’s mission of “recycling human potential from the field of broken dreams” is woven through his every professional opportunity and personal experience. Fran mentored returning Peace Corp volunteers in Transition Centers and directed a national municipal task force of mayors for the National League of Cities and US Conference of Mayors. He was called a “national asset” by a former White House Press Secretary for launching a transformative community development project in a South Carolina community of 1,100 people in the heated civil rights era of the late 1960’s. His involvement on numerous national advisory panels led to leadership roles with National Academy of Science, US Environmental Protection Agency and the Municipal Innovative Technologies Evaluation Program. Fran was a sales and marketing executive for two energy conservation consulting firms in Boston, Washington DC and Tallahassee. He has given speeches in over 50 cities across the US and published over 20 articles in national magazines on energy conservation, leadership and ministry. At First Baptist Church, Fran’s passion for teaching impacted worship services, Bible studies, home group gatherings, classes and curriculum for all generations. He was instrumental in city-wide hospitality efforts to bring churches and denominations together for both community events and worship. Starting in 1993, his personal letter offering comfort and encouragement to those mourning the death of a loved one began being called by recipients `the grief letter`. From Fran’s two decades of grief ministry, conducting 776 funerals and memorial services, and at the request of many, he authored the full-length book titled “The Grief Letter”. Fran is survived by his wife, Nancy; his three sons, John Buhler (Kim), Chip Buhler (Hope) and Jeff Buhler (Faith); his seven grandchildren Alexis Watkins (Riley), Caitlin Rath (Joel), Sam Buhler (Hannah), Josh Buhler, Simeon Buhler, Maya Buhler and Jackson Buhler; four great grandchildren, Calgary “Cal” Watkins, Blythe Watkins, Ezekiel “Zeke” Buhler and Micaiah Rath; and Fran’s five siblings, Beverly (Thomas) Baines, Lynn (Gary) Burns, Victor Buhler, Lera (Randy) Jones and Richard (Reba) Buhler and their families. In lieu of flowers, contributions in remembrance and honor of Fran may be made to Ridgecrest Foundation whose mission is to Impact Lives for God’s Glory through the Ridgecrest Conference Center and Summer Camps. Ridgecrest has impacted four generations of Buhler’s and is where Fran and Nancy will be resting in peace together. Donations to Ridgecrest Foundation: https://ridgecrestconferencecenter.com/give Susie Mozolic of Bevis Funeral Home is assisting the family with their arrangements. (850-385-2193 or www.bevisfh.com)

Fran Buhler, 80, a long-time resident of Tallahassee, passed away peacefully on February 9, 2021 at home. Born is Lebanon, Tennessee on July 17, 1940 to a Southern Baptist Preacher and homemaker, Allen and Amy Buhler, Fran grew up learning... View Obituary & Service Information

The family of Franchot "Fran" Buhler created this Life Tributes page to make it easy to share your memories.

Send flowers to the Buhler family.