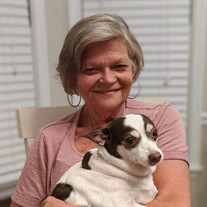 Francine "Frannie" Eugene Weeks (72) passed away June 1, 2021, in Lanark Village, FL. She is survived by her children Saralynn Redding (Joseph) of Tallahassee, FL, Kenny Webb of Norman Park, GA grandchildren William Redding (Gabby Redding), Nicholas Northrup (Kat Northrup), Kallie Redding (David Parker), Savanna-Jo Redding (Robert Leynes), and Cayden Webb and numerous other grand and great-grandchildren. Stepsons Gene Hilton (Tammy Hilton), James Hilton, Shawn Hilton, and John Hilton (Violet Hilton). Francine was born on January 23, 1949, in Ybor City, FL. In her late 30's Fran attended EMT school and would go on to obtain her license. Due to her nurturing personality being an EMT was a part of who she was, it was something she was known for, and it was something she was born to do. She wanted to help people, and on one occasion, she would even go on to save her grandson's life after a car wreck. She was a real-life superhero. Later in her life, Francine moved to Lanark Village, FL, where she became a staple in the community. She worked at the Lanark Village Mart for years alongside her best friend and her loving daughter. Later she worked at the Lanark Village American Legion (Post 82), where after only a few years, she was voted in as their president. Fran engraved herself into the Village, becoming an integral part of it. You don't live in Franklin County if you never knew Ms. Fran, if you weren't scared of her dogs, if she never made you a mushroom swiss burger, or if she never gave you a piece of her mind. The extraordinary thing about Fran was her spirit, her willingness to help, her sense of community, and how incredibly humble she remained through it all. She was who you turned to for advice, she was who you leaned on in a time of crisis, and she was always ready to give you everything she had to help. She didn't sugarcoat anything; she was honest and sincere. She was who you looked for in a crowded room; she was the whole life of the party. She was everyone's best friend, everyone's mom, and everyone's Memaw. Frannie enjoyed the simple things in life; her family, her friends, and her dogs. If you were a friend, you were family. She was the kind of person we all wish to be, and she left her mark in everyone she met. She had the type of soul that we know now lives on through everyone that loved her. She was so very loved by so many and will be greatly missed by all. In lieu of flowers, the family would prefer a donation to a Veteran's charity or a Domestic Violence charity of your choice. A private family celebration of Francine's life will be held at a latter date. Todd Wahlquist with Bevis Funeral Home (850-385-2193, www.bevisfh.com) is assisting the family with their arrangements.

The family of Francine E. Weeks created this Life Tributes page to make it easy to share your memories.

Send flowers to the Weeks family.