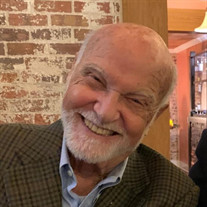 Frank Louis Visconti passed away peacefully on July 16, 2021. He was born in Fremont, Ohio on June 21, 1939, to Dr. Francis A. and Louise Visconti. He spent his childhood in Fremont, where his parents were the town doctor and nurse. Their office was in the family home, where he was a frequent patient himself; perhaps most notably when he proved that he was no match for the neighbors' cars driving through the alley behind their house. He attended St. Ann’s Catholic School in Fremont, Ohio, St. John’s Military Academy in Delafield, Delaware, and later graduated from Ohio University. He married Mary Visconti (Hoeflinger) in 1964, and moved his family to Tallahassee, FL on a leap of faith to start the Wendy’s Hamburgers franchise in 1974. After many successful years with Wendy’s, he went on to build a commercial real estate empire, was elected to the Tallahassee City Commission, and was the Mayor of Tallahassee in 1988. Frank never met a stranger, was always looking for the best deal, and loved spending time at the bagel shop or the bar with his many buddies. He loved fast cars, boats, buying and selling, and he cherished Sunday dinners with his family. He gave generously to his family, friends, colleagues, and often to strangers in need. He was quick witted, outspoken, loved to laugh, played hard, and enjoyed life. Survivors include Mary, his daughters Frances Sandon and her husband Philip, Lisa Pridgeon and her husband Randy, Lora Hauser and her husband Erich, his son Brandon Visconti, his grandchildren Catherine, Matthew, Caleb, Nick, Hayden, Dylan and Larsen, and his niece Catherine Clark, and nephew John Davies. He was preceded in death by his parents, and sister Frances Davies. The family is forever grateful for the love and support from Dr. Michael Forsthoefel and the ALG Senior Care team. An informal Celebration of Life is planned for Thursday, July 22nd from 4:00 to 6:00 at The Retreat at Bradley’s Pond. In lieu of donations or flowers, the family asks that everyone find a way to Pay It Forward and do something nice for someone else to honor his memory. Susie Mozolic of Bevis Funeral Home is assisting the family with their arrangements. (www.bevisfh.com 850-385-2193)

Frank Louis Visconti passed away peacefully on July 16, 2021. He was born in Fremont, Ohio on June 21, 1939, to Dr. Francis A. and Louise Visconti. He spent his childhood in Fremont, where his parents were the town doctor and nurse. Their office... View Obituary & Service Information

The family of Frank Louis Visconti created this Life Tributes page to make it easy to share your memories.

Send flowers to the Visconti family.