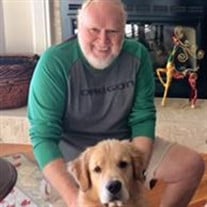 Fred Waterman left us on Sunday, September 5, 2021, at his home in Tallahassee, Florida, surrounded by his family and dog while watching his beloved Oregon Ducks win their home opener. Fred leaves behind his wife, of 38 years, Pat (Caddoo), sons; John Waterman and Travis Conn, daughters in law; Ana Waterman and Danielle Conn, and 7 grandkids; Riley, Matthew, Nicholas, Ryan, Isabella, Nathan and Michael. He was preceded in death by his parents John and Irene Waterman, sister Verna, brother Steve and infant nephew Christopher. Born October 31, 1945 in Prairie City, Oregon and Fred was raised in John Day, Oregon. While calling Tallahassee home for the past 16 years Fred also resided in New York, Iowa, Illinois and Oregon. A graduate of Grant Union High School where he was a member of the varsity football team, Fred subsequently went on to the University of Oregon a member of the Oregon Ducks football team. After graduation from the University of Oregon in 1968, Fred joined the US Army and proudly served as a sergeant in the 199th Infantry – Comanche Warriors in Vietnam from 1968-69. During his time in Vietnam, he served with men who became lifelong friends and brothers. Upon honorable discharge and receiving a Purple Heart, Fred began his 37-year career with the Veterans Administration working at 4 VA hospitals in 4 states Ending his career in New York, Fred and Pat moved to Tallahassee, where he became a very happy retiree, learning the love of golf, joining the Killearn Country Club and enjoying newfound friends while a part of the “SLUGs”. Fred adored his family, valued his friends and was a proud Vietnam veteran who was honored to serve his country when asked. Fred, per his request will be interred at the Tallahassee National Cemetery at 11:00AM on Thursday, September 16, 2021. Donations can be made in his name to the Leon County Humane Society or a charity of your choice. Kelly Barber of Bevis Funeral Home (850-385-2193 or www.bevisfh.com) is assisting the Waterman family with their arrangements.

Fred Waterman left us on Sunday, September 5, 2021, at his home in Tallahassee, Florida, surrounded by his family and dog while watching his beloved Oregon Ducks win their home opener. Fred leaves behind his wife, of 38 years, Pat (Caddoo),... View Obituary & Service Information

The family of Fred Waterman created this Life Tributes page to make it easy to share your memories.

Send flowers to the Waterman family.