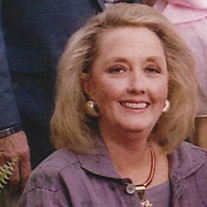 Gayle Vickers Watts, age 79, passed away peacefully on November 10, 2020, surrounded by her loving family and beloved pet, Annie. Gayle was born on July 20, 1941, in Tallahassee, Florida. She was extremely proud of being a fifth generation Tallahassee native and also extremely proud of her family. Gayle or Gabby as she was called by her granddaughters was a wonderful mother, grandmother and friend. She was fiercely loyal to both her family and her friends. Gayle graduated from Leon High School and attended Brenau University in Gainesville, Georgia. After Brenau, she met the love of her life, Larry C. Watts, and they built a wonderful loving life together. Gayle was a longtime member of Trinity United Methodist Church. She also was a member of the Junior League of Tallahassee. Gayle was preceded in death by her husband, Larry Watts; grandfather, Frank Stoutamire, former Leon County Sheriff and Chief of Police; and grandmother, Estelle Clemons Stoutamire. Her parents, Dr. C. Paul Vickers, Tallahassee’s first veterinarian and Margaret Stoutamire Vickers. Gabby was also preceded in death by many wonderful family pets throughout the years that she loved dearly. She is survived by her son, Paul Vickers Watts and his wife, Alice Lawrence Watts; three wonderful granddaughters that were the love of her life, Hayley Watts Hajjar and her husband, Sam, Chandler Elizabeth Watts and her fiancé, Trevor Davis and Stella Grace Watts; and first cousins, James, Beth and William Stoutamire. Gayle’s family would like to thank the nurses and caregivers who assisted her along the way, especially Frankie Fudge for her loyalty, love and friendship. A private graveside service will be held at Roselawn Cemetery with Pastor David McNeely officiating. In lieu of flowers, gifts in Gayle’s name may be made to Companion Animal Rescue Endeavor, 1881-B Martin Luther King Blvd., Tallahassee, FL 32303. Rocky Bevis and Kelly Barber of Bevis Funeral Home (850-385-2193 or www.bevisfh.com) are assisting the Watts family with their arrangements.

Gayle Vickers Watts, age 79, passed away peacefully on November 10, 2020, surrounded by her loving family and beloved pet, Annie. Gayle was born on July 20, 1941, in Tallahassee, Florida. She was extremely proud of being a fifth generation... View Obituary & Service Information

The family of Gayle Vickers Watts created this Life Tributes page to make it easy to share your memories.

Send flowers to the Watts family.