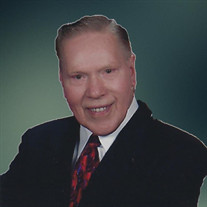 Gene Woolever, age 96, passed away on January 30, 2022 in Tallahassee, Florida where he has lived since 2013. He was born on January 6, 1926 in Broken Bow, Oklahoma to parents Alonzo and Zora James Woolever. Gene attended La Sierra University and graduated from Union College and Loma Linda University. He received degrees in both Religious Studies and Physical Therapy. He moved to Cleveland, Ohio and later to Cottage Grove, Oregon where he established a Physical Therapy department at Cottage Grove Hospital and maintained his own private practice locally and in the surrounding area. Gene still found time to host seminars, stop-smoking clinics, and help his community in various ways prior to retirement in 1991. After growing up impoverished, Gene worked hard to give his family everything he didn’t have as a child. He never missed a birthday, holiday, or anniversary but still believed he could never do enough for the family that he adored. His unconditional love and devotion as the ultimate “family man” was incomparable to his unwavering faith and devotion to God. Gene was a Head Elder of Cottage Grove Seventh-day Adventist Church and is remembered for being a daily reader of the Bible – which he estimated to have read front to back over 40 times. He also loved music, especially when his wife accompanied him on the piano while he sang. Another passion of Gene’s was admiring God’s gift of nature. Whether it was by immersing himself in it while on vacation, while gardening at home, or by simply learning about it. In fact, he is remembered for being all-knowing about various subjects. His thirst for knowledge had no bounds and Gene also boasted an incredible memory so he could retain most everything he learned. It should come as no surprise that an intelligent, analytical, and devoted family man, aptly named Gene, also had a passion for genealogy: the study of families, histories, and genetics. Gene is survived by his loving wife of nearly 53 years, Bertha Oksenholt Woolever. He also leaves behind children Sandra Garman, Anne-Marie Steinhouse, Rebecca Lucas, and Cheris Woolever; grandchildren David Garman, Crimson Steinhouse, Seth Steinhouse, and a sister Blondena Hawkins of Orange, Texas. He will also be missed by a host of beloved extended family members and friends whom he undoubtedly adored. Gene is now resting, awaiting the return of the second coming of the Lord Jesus Christ. He was predeceased by his parents and siblings Floy Simpson, Rasho Woolever, Rhoma Morgan Ellison, Barbara Engdahl, Jo McNabb, and Melba Jenkins. Gene will later be interred at Silk Creek Cemetery in Cottage Grove, Oregon among other family members. In lieu of flowers, memorial contributions may be made to Gene’s church home: First Seventh-day Adventist Church of Tallahassee (618 Capital Cir NE, Tallahassee, FL 32301 or https://adventistgiving.org/#/org/ANTBOV/envelope/start). Breanna Green of Bevis Funeral Home is assisting the family with their arrangements. (850-385-2193 or www.bevisfh.com)

Gene Woolever, age 96, passed away on January 30, 2022 in Tallahassee, Florida where he has lived since 2013. He was born on January 6, 1926 in Broken Bow, Oklahoma to parents Alonzo and Zora James Woolever. Gene attended La Sierra University... View Obituary & Service Information