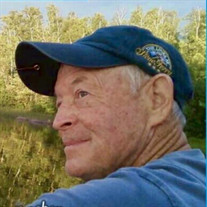 Gerald Walker Hardwick, age 77, of Tallahassee, entered into rest January 10, 2022 at Pruitt Healthcare. Gerald was a 1964 graduate of Dillon High School where he was a star athlete. He participated in football, pole vaulting, boxing, held the record for the mile run in track, the record for the rope climb, and was a member of D Club and the Fellowship of Christian Athletes. After high school, Gerald served in the US Army National Guard for six years. Gerald was a stockman at a retail department store who was working his way up to management. In 1977, Gerald was recruited to become one of the first Walmart managers, when Walmart expanded out of Bentonville, Arkansas. There, he worked for 20+ years beginning in Charleston, SC, then transferring to Apalachee Parkway, Tallahassee, Florida, then to Plant City, Florida where he retired in 1989. Gerald was dedicated to his work and was beloved by his employees and coworkers. After retirement, Gerald couldn’t sit still and decided to open a used car dealership, South Monroe Auto Sales, that he and his son, Eric, operated together. While Gerald spent a lot of his time working, there was nothing more important to him than his family. He was the oldest of four siblings and had four children himself, and he made sure to be the protector of them all. Gerald may have been compact in stature but was mighty in valor, never backing down from anyone- big or small. “Let’s go fishing”, is a common invitation you may have heard from Gerald, as he loved being out on the water or telling the “biggest” fish tale. He found unlimited pleasure in the outdoors, fishing, hiking, and scuba diving and found even more joy in an experience when he included others in his adventures. Growing up, Gerald could be found either fishing on the river with his daddy or spending time at the beach. If you hear the phrase ‘giving someone the shirt off your back’, you might think of Gerald. He was generous and could often be found buying someone else’s groceries or their gas if he saw they were in need. Gerald adored the company of others and would go to the shooting range just to find good conversation. Gerald was a sharp, witty guy who loved Roy Orbison, fast cars, a good joke told by his brother Tony, cleaning fish, shrimping, scuba diving, fixing things (sort of), and going to the flea market to find a good bargain. Gerald is survived by his children Dawn Whitehurst of Tarboro, NC; Heather Cuajunco of Charleston, SC; Andree Buckthal of Bicknell, IN; Eric Hardwick of Tallahassee, Florida; and nine grandchildren; siblings Jan, Tony and Kathy. He was preceded in death by his parents Jesse Walker Hardwick and Agnes Miller Hardwick; brother Billy Hardwick. A Celebration of Life service will be held Saturday, January 22, 2022 at 2:00 p.m. at Bevis Funeral Home. The family will receive friends at the funeral home following the service. In lieu of flowers, memorial contributions may be made to the Alzheimer’s Association, 225 N. Michigan Ave., Floor 17, Chicago, IL 60601. Susie Mozolic of Bevis Funeral Home is assisting the family with their arrangements. (www.bevisfh.com 850-385-2193)

Gerald Walker Hardwick, age 77, of Tallahassee, entered into rest January 10, 2022 at Pruitt Healthcare. Gerald was a 1964 graduate of Dillon High School where he was a star athlete. He participated in football, pole vaulting, boxing, held... View Obituary & Service Information

The family of Gerald Walker Hardwick created this Life Tributes page to make it easy to share your memories.

Send flowers to the Hardwick family.