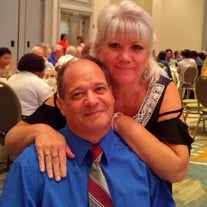 Glenn John Petruzzi, age 70, passed away on September 1, 2021 in Tallahassee. He was born in Queens, New York on October 13, 1950 to parents Leon Petruzzi and Lillian Pollock Petruzzi. Glenn later moved to Derry, New Hampshire where he was a member of Granite State Church of Christ (now known as Freedom Point Church). Upon moving to Tallahassee, he joined 1200 Tharpe Street Church and was a steadfast member until his passing. No matter where Glenn was in life, his faith and devotion followed him – he was even ordained as a minister early in his adult life. Glenn was known for being a jack of all trades, one who specialized in what he called “pain in the neck jobs.” In reality, he thoroughly enjoyed all the masonry, woodworking, flooring and various house rehabilitation work he put his mind to. He is fondly remembered as the “problem solver” of his family and friends – he could fix or do anything. What Glenn loved most about his expertise, however, was probably the fact he was helping others. His incredible skillset and helpful attitude will live on forever because now “everyone has a piece of Glenn in their homes.” When Glenn wasn’t putting his skills to the test or solving the problem of the day he enjoyed Bible study, candlepin bowling, and watching sports – especially when his son was playing basketball. In fact, Glenn loved doing anything that involved his family. Many have memories of his handmade scrapbook of his son’s life and accomplishments, often taking hours to excitedly describe each page while overcome with pride. Glenn was even more proud to be called “Pop Pop” or “Grandpa” by his 10 grandchildren. Survivors include his loving wife, Laura Dyer Sienkiewicz; children Glenn Phillip Petruzzi (Danielle), Shelby Petruzzi Strickland (Aaron), Adam Sienkiewicz (Brianna) and Amanda Sienkiewicz (Ben Farmer); grandchildren Joshua Petruzzi, Noah Petruzzi, Manny Petruzzi, Gemma Strickland, Everly Strickland, Adalynn Moynihan, Decklen Moynihan, Stella Sienkiewicz, Greyson Farmer and Hadley Farmer; sister Jana Rodger (James) as well as various nieces, nephews, cousins and the extended Dyer family who all loved him dearly and will miss him deeply. No local services will be held. In lieu of flowers, memorial contributions may be made to the Benevolence Fund of Glenn’s church home, 1200 Tharpe Street Church: www.onrealm.org/1200Church/-/give/MSYXQPYKWH Breanna Green of Bevis Funeral Home is assisting the family with their arrangements. (850-385-2193 or www.bevisfh.com)

Glenn John Petruzzi, age 70, passed away on September 1, 2021 in Tallahassee. He was born in Queens, New York on October 13, 1950 to parents Leon Petruzzi and Lillian Pollock Petruzzi. Glenn later moved to Derry, New Hampshire where he was a... View Obituary & Service Information

Send flowers to the Petruzzi family.