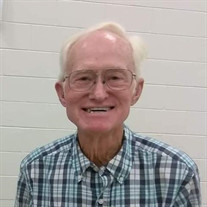 H. Marcus Edwards, 87, left this earth for his heavenly home on Sunday, November 7th, 2021, surrounded by his loving family at his residence in Southside Sawdust. He was a beloved husband, father, and grandfather, he will be deeply missed. Marcus... View Obituary & Service Information

The family of H. Marcus Edwards created this Life Tributes page to make it easy to share your memories.

H. Marcus Edwards, 87, left this earth for his heavenly home...

Send comfort and support when it's needed most.