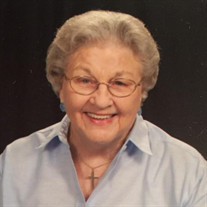 Harriette Martin McCarter, 95, passed away on April 14, 2021 at Westminster Oaks, Tallahassee, where she had been a resident for several years. Born in Walterboro, South Carolina, she was the daughter and oldest child of Grace Martin McCarter and Jamie Lamar McCarter. Her two brothers, Jamie L. McCarter Ill and William E. McCarter, predeceased her. After graduation from Clermont-Minneola High School, she received a Bachelor's degree from the Florida State College for Women and later a Master's degree from Florida State University. As an elementary teacher, she taught for a total of forty-four years in the Leon County School System, the FSU lab school where she was affiliated with the College of Education in teacher training, and at Holy Comforter Episcopal School. She had the privilege of serving one year as a Fulbright Exchange Teacher in England. As a member of Pilot Club, she served as Past President. Her years of teaching were followed as a volunteer with Big Bend Hospice for 20 years. Survivors include sister-in-law Hilda Hawkins McCarter of Lakeland, FL; nephews Steve McCarter (wife Connie) of Lakeland, FL and Jamie McCarter of Daytona Beach, FL; great-nieces Brittany Colding and her daughter, Riley Jane Colding, of Lakeland, FL and Stormie McCarter of Lakeland, FL; great-nephews, Timothy McCarter (wife Tiffany) and Paul Gilliland of Lakeland, FL; and cousin Sara Martin of Tallahassee, FL.; and a host of friends who loved her dearly. The family will be receiving guests for a visitation at Holy Comforter Episcopal Church on Monday, April 19, 2021 at 10:00 a.m. to be immediately followed by funeral services at 11:00 a.m. A private family interment will be held at Oakland Cemetery after funeral services have concluded. In lieu of flowers, memorials would be gratefully received for Holy Comforter Episcopal Church where she was a founding member. Susie Mozolic of Bevis Funeral Home is assisting the family with their arrangements. (850-385-2193 or www.bevisfh.com)

Harriette Martin McCarter, 95, passed away on April 14, 2021 at Westminster Oaks, Tallahassee, where she had been a resident for several years. Born in Walterboro, South Carolina, she was the daughter and oldest child of Grace Martin McCarter... View Obituary & Service Information

The family of Harriette Martin McCarter created this Life Tributes page to make it easy to share your memories.

Send flowers to the McCarter family.