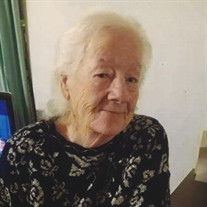 Hazel Gertrude Davis, age 88, passed away on February 13, 2022 just one day shy of her birthday. She was born in 1933 to parents Emmanuel and Eunice Irene (Roberts) Davis in Sopchoppy, Florida. She graduated from Sopchoppy High School and soon thereafter, moved to Tallahassee and attended Tallahassee Community College. Hazel then received her Bachelors in Business from Liberty University while working for Centel, where she would dedicate over 40 years as a supervisor prior to retirement. Hazel attended Berean Christian Fellowship Church of Tallahassee. She was known by the community, her family, and her church family for always being willing to give the shirt off her back. She exemplified the true meaning of altruism - her generosity, complete selflessness, and unconditional love touched countless hearts during her lifetime. In contrast, she is also remembered for her sharp wit. Survivors include her doting daughter and son in-law, Rhonda R. Dozier and Craig Dozier; siblings Broward Davis, Larry Davis, Jean Yale, Bruce Davis and Ricky Davis; grandchildren Porschea Dozier, Preston Dozier, Mercedes Dozier, Cole Dozier, Trevor Dozier, Callie Dozier, McKinley Dozier, Teila Dozier, Autumn Dozier, Josiah Dozier, Jessa Dozier, Asa Dozier, Katelynn Davis and Taylor Davis as well as 15 great-grandchildren and a host of extended family members. Hazel is now reunited with her parents and others who preceded her in passing: siblings Howard Davis, Helen Davis, Terry Davis and Don Davis; grandchildren Troy Davis and Beau Dozier. The family will be receiving guests for a visitation at Bevis Funeral Home of Tallahassee on Friday, February 18, 2022 from the hours of 6:00 – 8:00 p.m. Her service will be held graveside at West Sopchoppy Cemetery on Saturday, February 19, 2022 at 10:00 a.m. Breanna Green of Bevis Funeral Home is assisting the family with their arrangements. (850-385-2193 or www.bevisfh.com)

Hazel Gertrude Davis, age 88, passed away on February 13, 2022 just one day shy of her birthday. She was born in 1933 to parents Emmanuel and Eunice Irene (Roberts) Davis in Sopchoppy, Florida. She graduated from Sopchoppy High School and soon... View Obituary & Service Information

Send flowers to the Davis family.